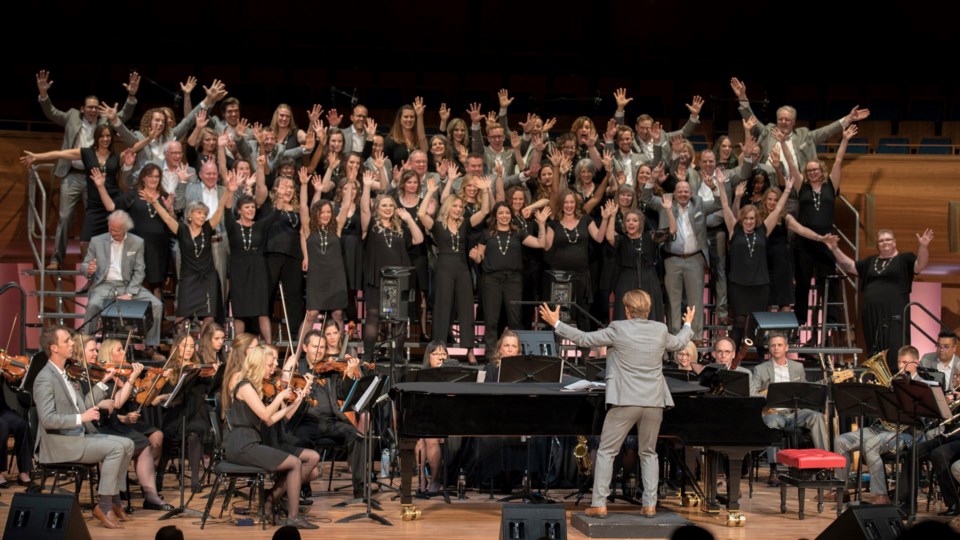 BANFF – Crafting beautiful harmonies to lift people out of the January blues, a group of musicians have united to raise money and support for the YWCA Banff Bridge house.

Howard Thornton minister of St. Georges-in-the-Pines Anglican Church in Banff said he is thrilled to be bringing the New West Symphony and Chorus to the Banff Centre stage for their second annual performance in support of the YWCA Bridge House.

Thornton said he was inspired to launch the concert fundraiser after meeting YWCA Banff executive director Connie MacDonald and learning about the difficult housing situation in the Bow Valley.

“We both just connected about this – it’s a really important thing,” Thornton said. “It was a concern for women and children in the Bow Valley and giving them a new start.”

The church and the YWCA began working together and were able to found Bridge House to respond to the community's needs. The concert serves as a fundraising opportunity for the facility.

One of the biggest challenges the YWCA faces when helping women escape domestic violence is finding them a safe space for them to live MacDonald said, explaining that this need makes Bridge House a pivotal asset for the community.

This issue is amplified in the Bow Valley because of the cost of rent in the area and limited availability of housing.

“Bridge House provides us with a facility that we can use to support families through this period,” MacDonald said, adding that families have the opportunity to stay for up to 12 months in facility allowing them to have the time to “get back on their feet.”

Bridge House serves as a place to foster a space of safety and stability for people who experience violence and moving forward from a time of crisis after experiencing trauma.

MacDonald said she appreciates the partnership the YWCA and St. George’s church have been able to foster. She added that she is amazed at the ongoing support and fundraising the congregation has done for Bridge House.

“It’s an integral part of our spectrum of housing that we provide in our community – being able to provide transitional housing it is critical for the steps in women and families moving forward,” MacDonald said.

Thornton described the New West Symphony and Chorus concert as a “celebration of hope” because it features inspiring music and unites the community to work together in creating a better reality for those who need support.

“It gives hope to women and children who are maybe going through a difficult time, but also we could all use a little help,” Thornton said. “It works both ways.”

He added that the performance plays a critical role in helping generate a conversation about vulnerable demographics in the Bow Valley. It can be a difficult subject to tackle and he hopes that the concert helps encourage conversation and serve as a tool to aid people in seeking out help when they are in need.

“The YW has just done a tremendous job in being supportive and helpful for women, for everybody,” Thornton said. He added that it is important to create a space of hope and dialogue in the community because “There is a real genuine desire to help."

It is amazing collaborating with the orchestra and composer Henrich Ivestrom, Thornton said. He added that the symphony and chorus bring incredible talent and experience to the stage while sharing a deep enthusiasm for helping those in need.

“They have a passion to do something good for society, but they also have this passion for music,” Thornton said. “When you watch Henrich [Ivestrom] conduct you can see the passion.”

The musicians cover an array of music from pop to spiritual, he said, adding that the audience is in his experience, “blown away by the music, and depth of feeling the performers have.”

Ivestrom has served as the conductor of the New West Symphony and Chorus for the past two and a half years and is composed of 68 singers and an orchestra of 25 – all volunteers.

The group is dedicated to raising money for community programs, Ivestrom said, explaining that they have collaborated with groups that include the Mustard Seed, CUPS and others along with Bridge House.

“This is right in our mission to bless others,” Ivestrom said.

The concert is not what one would typically expect from a choir, he said, because the group can perform across many genres.

“We’re very enthusiastic, we’re passionate and energetic,” Ivestrom said, explaining that the group will perform a mix of gospel, pop and show tunes. “We’ll do some songs that will cross a bridge to all types of people.”

Ivestrom said that the group is very interactive with the audience and works to make them feel like part of the show. He added that some of the pieces are performed while choir members are in the audience.

“We’ll sing around the people – we’ll sing in the aisles,” Ivestrom said. “People feel like they’re part of the music, part of the experience as opposed to just separate and watching.”

All profits raised from the concert go directly to the YWCA Bridge House. The New West Symphony and Chorus will be hosting the benefit concert sponsored by St. George-in-the-Pines Anglican Church in support of the YWCA Bridge House on Saturday (Jan. 25) at the Banff Centre at 7 p.m. Tickets are available for $20.