CANMORE – Have you ever read a book that takes on a life of it’s own so much that you’re convinced the characters are about to leap off the page and run around? That’s the premise behind the Pine Tree Players latest offering, Alberta writer Andy Garl
0
Nov 15, 2018 12:00 AM By: Brandon Wilson 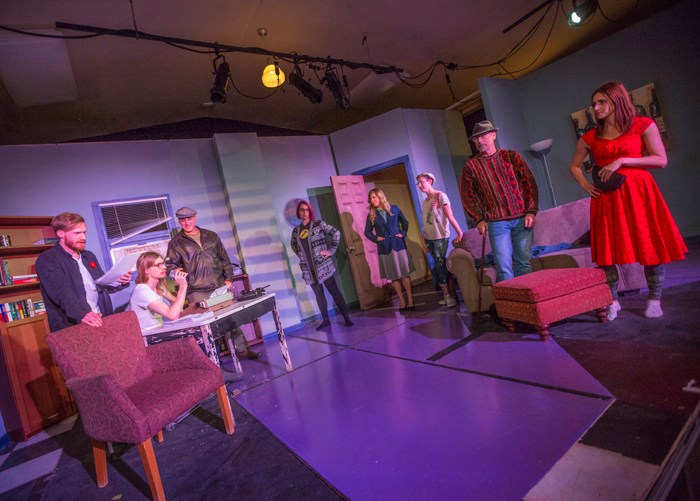 The cast of “… And then the lights went out” pose for a photo during rehearsals at the Miners’ Union Hall in Canmore on Thursday (Nov. 8). The play runs from November 14-24 at the hall.

CANMORE – Have you ever read a book that takes on a life of it’s own so much that you’re convinced the characters are about to leap off the page and run around?

That’s the premise behind the Pine Tree Players latest offering, Alberta writer Andy Garland’s ...And Then, The Lights Went Out.

The play is about a writer, Thomas, in the midst of an Edmonton heat wave who is dealing with the world’s most severe case of writer’s block. As he tries to finish his latest noir detective thriller, the characters spring off the page and plague his writing.

“The five fictional characters are coming off the keys of his type writer,” said co-director of the production Louise Shore. “He sits down and as he begins to type, they go into action.”

According to Shore, a lot of the comedy of the play comes from when Thomas isn’t writing, but his characters still need something to do. They may chat amongst themselves, hound him to keep writing, or plot their own schemes.

…And Then, The Lights Went Out, is written to be a good time for those who are fans of the film noir genre. The play is filled with the stock characters that film noir loves, a hard boiled detective, a femme fatale, and a thug with more muscle than brain, all lending themselves to the drama of Thomas trying to finish his work.

Hugh Notman plays Bruno, a thug who is trying to make Thomas transform his character into something more than just a bad guy. Notman, who is a large man, joked that he didn’t have to try too hard to look like Bruno.

“Well some people say I don’t have to do too much,” he said laughing. “It’s a little bit of Rocky Balboa mixed in, kind of a loveable thug.”

The interplay between real life and the fictional characters has been challenging for the Pine Tree Players cast. They’ve worked hard to get that transition into a seamless experience for audiences, as well as planning some exciting fight scenes.

“It’s a complex play, and it’s a difficult play. I don’t mean that in a derogatory way, but there’s a lot going on and it’s a lot of work,” said Notman. “I think it’s really coming together and people will appreciate it as a complex play… and the characters are funny. They’re stock characters, but then they have their own personalities as well.”

Courtney Schreiner who plays the femme fatale Claire agreed with Notman the complexity of the characters is fun to perform.

“She’s sassy, lethal and cunning, those are the words to describe Claire,” said Schreiner. “It’s fun because it’s broken up into two worlds, your reality world and your character world. And the characters can come out into the reality world a bit, so the character changes a bit, and then it’s back getting written about and you’re back playing that character. You delve right into it.”

The play started it’s run on Wednesday (Nov. 14) and continues until Nov. 24. Tickets cost $20 and can be found at www.eventbrite.ca.