CANMORE – A big theme in Jan Redford’s memoir, The End of the Rope: Mountains, Marriage and Motherhood, is self-doubt. And, she declared with total confidence, “It’s very hard to write a memoir about self-doubt when you’re afflicted with self-doubt.
Apr 19, 2018 12:00 AM By: Rocky Mountain Outlook 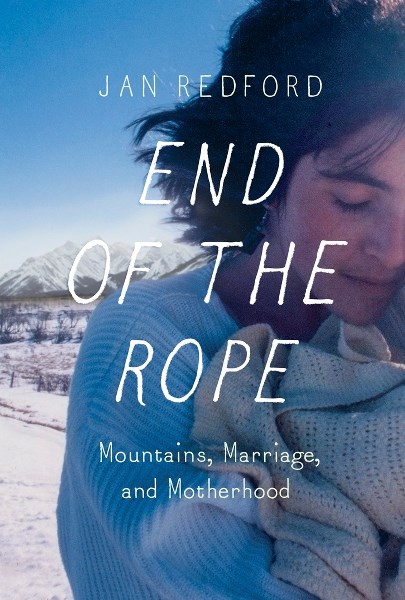 End of the Rope.

CANMORE – A big theme in Jan Redford’s memoir, The End of the Rope: Mountains, Marriage and Motherhood, is self-doubt.

And, she declared with total confidence, “It’s very hard to write a memoir about self-doubt when you’re afflicted with self-doubt.”

In her book, newly published by Penguin Random House, Redford transcends that self-doubt as she progresses from bold teenager to tenacious 20-something rock climber and mountaineer, to grieving her live-in boyfriend’s avalanche death, to overwhelmed mother of two toddlers determined (interrupted by much self-doubt) to gain a university degree despite the challenges of an incompatible marriage to their father.

For the reader, the journey is alternately – at times simultaneously – entertaining, heart-wrenching, knee-slapping hilarious and gripping as a steep rock climb with thin, sloping holds.

Writing the book involved a process spanning 11 to 17 years, depending on whether her starting point was an essay she wrote while teaching elementary school in Golden, B.C. about her toddler son’s antics, or 2005 when, living in North Vancouver with her children and soon-to-be new husband she enrolled in some University of British Columbia courses. Redford prefers to view her official start point as 2007, when she began The Writing Studio at Simon Fraser University.

“That’s where the idea of turning my snippets of writing into a memoir took off,” Redford said.

After years of writing essays and articles, charging ahead into difficult challenges and circumstances and learning to accept responsibility for all her decisions – mistakes and successes alike – Redford, 57, said what she’s most proud of is that she rode through the tough times to accomplish her dream of seeing her book published.

“I am so proud that I stuck through the discomfort, the discouragement, the self-doubt, for however long it’s been, and that I had the self-belief after all, to hound Random House until they accepted my manuscript,” Redford said. “But really, how did I dare dream of being a climber at age 14? How did I dare go back to school with two little kids? It’s amazing what we can achieve when we keep throwing ourselves at ridiculously improbable dreams for years and years until the world just can’t stand us anymore and capitulates.”

Writing a memoir worth reading demands courage from the author to be unflinchingly honest about episodes that are potentially embarrassing, painful and deeply revealing. Redford succeeds, diving in the way she tackled learning to roll her kayak in rushing whitewater, or pushing herself far beyond her last piece of protection on an overhanging rock climb.

But while she bared her own soul on the page, the necessity of exposing others through her relationships with them was her “biggest hurdle.”

“I expose other people in my memoir. How could I not when my life is so intertwined with other people’s lives?” Redford asked. “This has been my biggest hurdle. I try to go through life doing the least amount of damage to others. Writing a memoir is not exactly the best way to stick to that maxim. But I protected people as best I could while still writing my truth.”

To accomplish that she called people by their first names, and in some cases, changed their names. A Canmore resident from 1981 thru 1988, Redford worked as a Camp Chief Hector counsellor, Nakiska ski patroller and cadet camp climbing instructor. Longtime Bow Valley climbers will recognize many of those names.

Now, having been interviewed numerous times on radio and even CTV, which was “type three fun – terrifying, harder than any climb or any river I’ve paddled,” Redford said she’s learned to enjoy being on stage and sharing her story.

“Growing up in a household like mine with an alcoholic father, and everyone, my mother, other adults, pretending everything was normal, I learned to question my reality,” Redford said. “This memoir helped me to find my voice in life, internally, not just on paper. The act of publishing this memoir, not just writing it, is my act of transferring power from others to myself.”

Nearing the end touring with stops including Toronto, Fernie and Squamish, where she and her husband live, Jan Redford will answer questions and read from The End of The Rope on Sunday (April 22), at the Georgetown Inn, at 7 p.m. Café Books will be selling copies for Redford to sign.