Organizers of an upcoming sing-along on Thursday (April 1) are reaching out to the community for participation.
Mar 30, 2021 2:00 PM By: Jordan Small 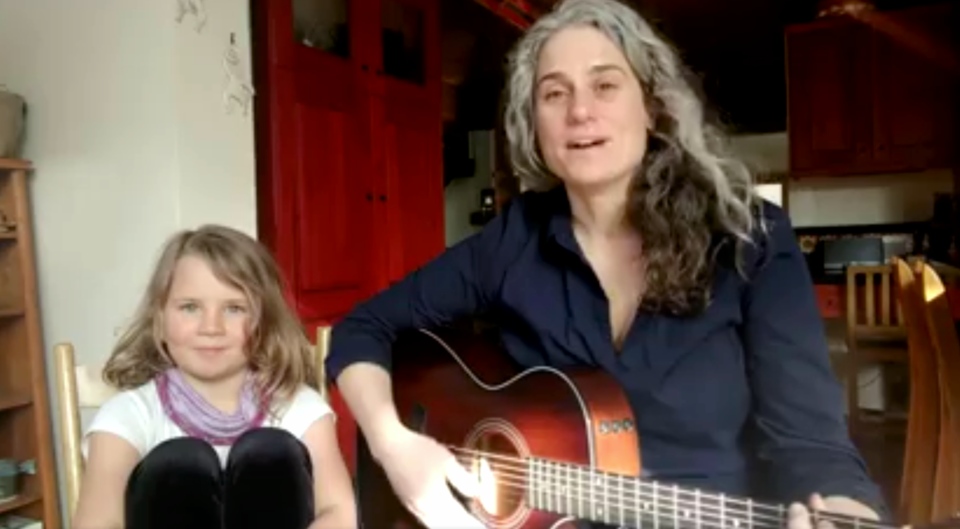 Ellen Braum and her daughter sing "Okay" on an artsPlace video.

BOW VALLEY – Sometimes, all we need is a little positive encouragement.

A community sing-along is taking over airwaves Thursday (April 1) at 1 p.m. as Canmore musician and songwriter Ellen Braun will lead an on-air ballad for her song "Okay," which, during these times, feels like a warm arm snuggled around the shoulders.

"It was a song I wrote to myself when I was having a hard time, but the lyrics themselves are really universal," said Braun, who debuted "Okay" one year ago during the early stages of the pandemic.

"It literally feels like a song for any occasion where someone isn't in a great place, and it's a reminder things will get better, or it's an acknowledgement that things are hard right now, so it doesn't force a solution."

Braun will perform a real time sing-along on Zoom, and 106.5 Mountain FM is airing the songwriter and musician's segment.

Those wanting to sing-along can find the lyrics and video tutorials on artsPlace's website, which is partnering with Braun and the local radio station.

The community is encouraged to record and submit video singing or playing the song to artsPlace at communications@artsplacecanmore.com, which will be made into a compilation video.

"The arts can play a vital role in expressing emotions and improving mental well-being," said programs manager Nicole Fougère. "I was so moved to see all the videos of people singing along with Ellen's beautiful ballad last year. Families, children, solo-singers and professional musicians alike all sang from their hearts and sent in their videos to artsPlace.

"Ellen's song 'Okay' reminds us that it's OK not to be OK all the time. It acknowledges that things are hard, and then reminds us that we can make it through together."
Braun originally wrote and recorded the song a few years ago at The Banff Centre for Arts and Creativity.
She sat on the passion piece, but when the pandemic broke out, she thought it was the right time to release the song and use it as a type of healing mechanism for close friends and greater public.
But Braun didn't expect at all for the song to hold as much relevancy today as it did then.

"Even though we're still in this place and we're so far apart, the difference now between last year is we have hope," said Braun. "I do feel like there's so much to celebrate: there are vaccines, they are getting rolled out, there's light at the end of the tunnel that we will be able to be close to each other again."

Braun's "Okay" is free to download in March; however, any donations made will be used to help others such as the Eagle's Nest Stoney Family Shelter, a short-term emergency shelter for women and their children, located in Morley; and Jack.org, Canada's only charity training and empowering young leaders to revolutionize mental health in every province and territory.