You can watch the creative battle action from the comfort of your own couch this year, or at one of six art studios, which will have two artists at each battling to win the Creative Combat 6.0 champion
Nov 12, 2020 4:00 PM By: Jordan Small 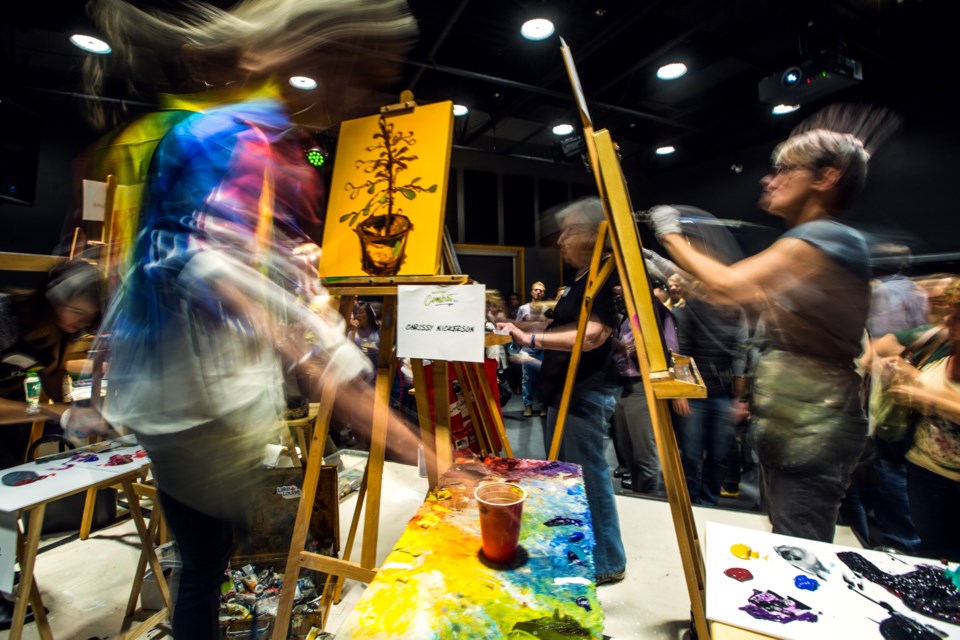 CANMORE – The action-packed battle royal of art creaton hits blank canvases this weekend as artists prepare to work as quick as possible to make their masterpiece in the fan-favourite competition.

Creative Combat 6.0 returns to Canmore Saturday (Nov. 14) at 7 p.m. and how organizers re-imagined the event to make it a go during a pandemic has been nothing short of a work of art.

“It’s definitely been an exercise in creativity,” said Becky Lipton Fournier, organizer of Creative Combat. “We really wanted to bring this to the community. We know that people look forward to it every year and for us, we love this event, and to do it in safe way.”

The competition will run mostly in similar fashion as previous years with 12 local artists painting blank canvases in two 20-minute rounds. The winner and runner-up will be announced at the end.

However, both the artist and fan experience have been tweaked to match the unprecedented times.

Instead of being held exclusively at local arts and culture hub, artsPlace, the competition is at six venues with two artists per location. A livestream at each location will be available for those unable to attend one of the small gatherings.

“We have two options for fans to participate,” said Lipton Fournier. “A couch party ticket, which has a link to watch live and a link to vote over your phone. And an option for people to still participate live … at a location with small audiences and a screen to watch the other artists.”

The online livestreaming of Creative Combat allows for the possibly of more eyes on the competition.

With a smaller in-house crowd at each location, it’ll be less of a crazy atmosphere on the outside, but will still present its own mental toughness challenges, said Elk Run artist Barb Fyvie, who is participating in her third Creative Combat.

“It’s really important to figure out your strategy and what can be done – you’re constantly thinking you don’t have enough time,” said Fyvie. “I made the mistake one year and didn’t have anything for final round because I didn't think I'd make it. You need to have a pretty clear idea going in on what you're going to do."

Creative Combat is artsPlace's largest fundraiser of the year. An online silent auction is available for viewing at www.artsplacecanmore.com.