Eclectic offerings at CAG's Off The Wall

The Canmore Art Guild Gallery is currently running its annual and popular exhibit Off The Wall, featuring three-dimensional art, to Nov. 22.
Nov 10, 2016 12:00 AM By: Rocky Mountain Outlook 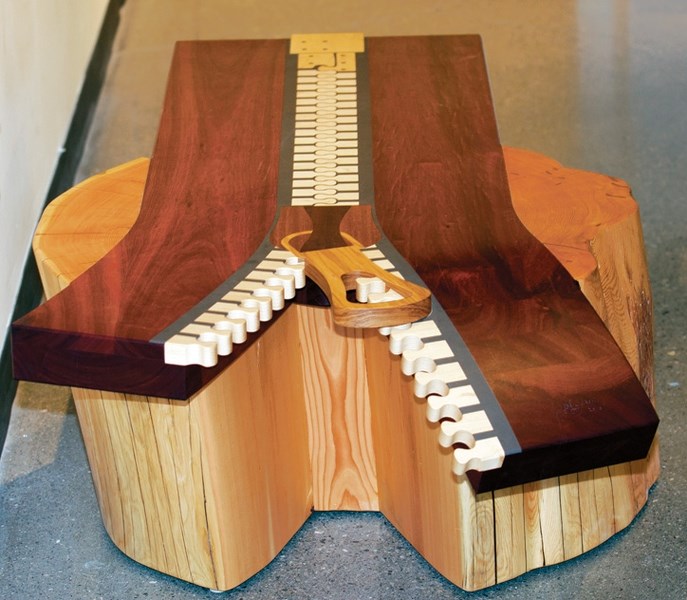 The Canmore Art Guild Gallery is currently running its annual and popular exhibit Off The Wall, featuring three-dimensional art, to Nov. 22.

This year’s exhibit is curated by Woo, Dunkley and Janes. In 2003, Richard Lamartine, Martin and Janes decided it was time to celebrate three-dimensional art in the CAG gallery. They planned and installed what would become one of the guild’s best known and anticipated group exhibits.

New member Riley started with ceramics in high school, and decided it was a career she wanted to pursue in her post-secondary education. A class at Red Deer College opened up her eyes to the world of ceramics and the limitless possibilities. Seeing other artists making a career of it and artists teaching, clinched it for her.

Riley graduated from ACAD last spring with a specialization in ceramics and did a residency at the Banff Centre in ceramics in June, consisting of wood firing with ceramic artist Robin DuPont.

“It was amazing and a highlight of my life, because they also had their exhibition coinciding at Willock & Sax (Gallery),” said Riley.

The science and chemistry behind wood firing for ceramics is quite remarkable. The type of wood used during a firing will have a deep impact on the outcome of the ceramics once they leave the kiln.

“That’s the thing I love about ceramics,” said Riley. “I like to think of myself as a ceramics nerd and I’m really interested in the technical aspects behind kilns. That’s why I wanted to take part in that residency, because I had gotten a taste of wood firing which is more of a complex technique than other ceramics processes like electric kilns which are easier to use.”

“With wood-firing you’re going back to traditions and the faculty and others in that residency are taking it to a whole new level. But I’m also into the contemporary art culture so it’s the perfect think for me.”

She says if she wasn’t doing ceramics, she would have probably pursued a trade of some sort, since there is still an aspect of working with her hands she enjoys.

A selection of the pieces in the Off The Wall exhibit were a part of her graduation exhibit at ACAD, with the artistic concept of creating a juxtaposition between dual experiences in the landscape.