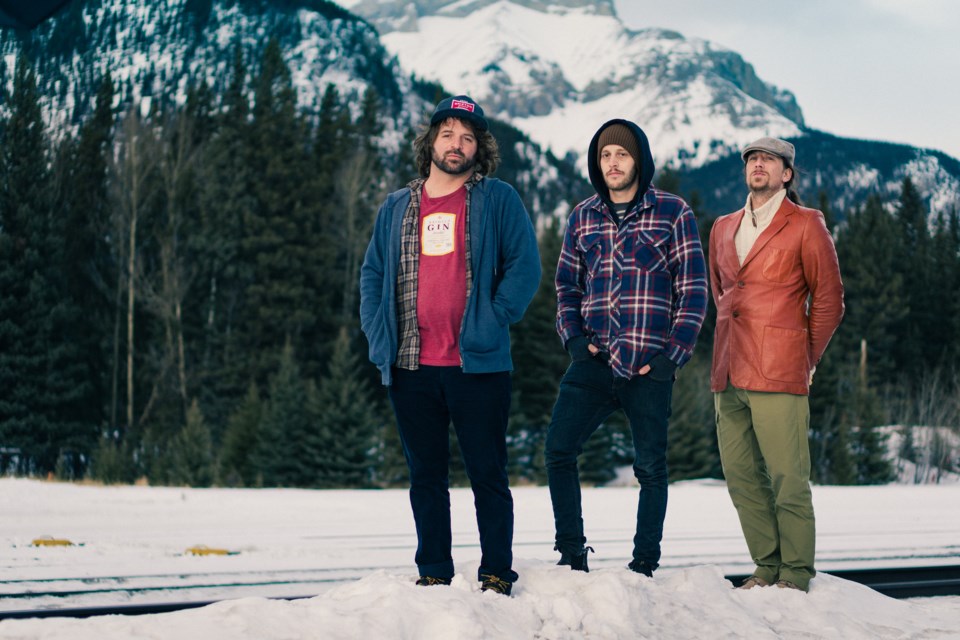 Elk Run + Riot will be releasing its fourth album Morning Light at the end of January. SUBMITTED PHOTO

BANFF – Capturing the feeling of a good night out with friends through song, the Bow Valley band Elk Run + Riot will be releasing its fourth album Morning Light at the end of January.

“We just released our new single, so that is pretty exciting,” said the band's singer and guitarist Ryan Schepens.

Elk Run + Riot is formed by the core group of Schepens, Andrew Cotter on vocals, bass and guitar, and Brian Bailey on mandolin and bass.

“It’s what we live every day,” Schepens said.

Schepens said he hopes that the band has inspired fans to come and check out the mountains after listening to one of its songs.

“Inspiring people to do anything – that’s the goal.”

Elk Run + Riot is known as an alternative folk-rock band in the Bow Valley, Schepens said, but their new album has incorporated some musical experimentation.

“It’s a bit more of a move in the indie-rock kind of direction, but we're still holding onto our folk influences.”

Morning Light marks the band's fourth studio album. Over the years playing music together, the band's members have learned what sound works best for them on stage, Schepens said, adding that they have been focused on building their strengths as individuals and as a band.

“We’ve learned what works for us and what doesn’t work for us,” Schepens said.

“Our songwriting approach kind of changes from time to time. Sometimes it starts with a really cool lyric that one of us writes … or sometimes it starts with a guitar riff that someone comes up with. Over the last seven, or eight years or so now, we’ve learned to be brutally honest with one of each other too. If someone writes something that the rest of us hate, we’re not afraid to tell them that it sucks and move on to something else.”

The musicians have grown stronger as a band and try to live by the mandate “honesty is key” when creating songs and finding success as musicians, he said, explaining the new album reflects on their growth.

Schepens said he is excited for people to hear the first single from the album, Morning Light.

“That one kind of stems from, at least when I was writing the lyrics for it, time spent in Banff years ago with close friends,” Schepens said.

“The friends you make in your early 20s that you kind of hang out and party with and still talk to, to this day – it’s looking back on that.”

He added he is also excited for people to hear the single "Castle Wolf" – a tune that is a bit more folky and darker in tone compared to the other eight songs featured on the album.

“The lyrics are a bit darker and it’s in a minor key,” Schepens said. “It touches on some darker material – people dealing with addiction and love lost and trying to figure out life.”

The inspiration behind Castle Wolf comes from the band's experience of witnessing people who struggle with drug and alcohol abuse in the Bow Valley and the journey as they try and climb their way out. It can be a difficult subject to tackle, Schepens added, because members of the band do not necessarily have that first-hand experience and instead write from "looking in from the outside."

"We try to write about things that will touch people and matter to people,” he said.

Elk Run + Riot has been able to gig several songs from the new album live since it was recorded last February, Schepens said, explaining that it is always a special moment when the band can bust out a new tune for fans.

“When you can switch it up and throw something new at them, it’s always kind of exciting.”

The latest single will be released in early January, followed by the release of the band's fourth album Morning Light on Jan. 31.

“I’m really excited for people to hear about and see it,” Schepens said. “We’re pretty stoked to see how it goes.”