The 2011 Banff Mountain Film and Book Festival takes off this weekend with the screening of seven feature films, as well as a number of shorts and other activities. All screenings take place in the Eric Harvie Theatre at The Banff Centre.
Oct 27, 2011 12:00 AM By: Rocky Mountain Outlook 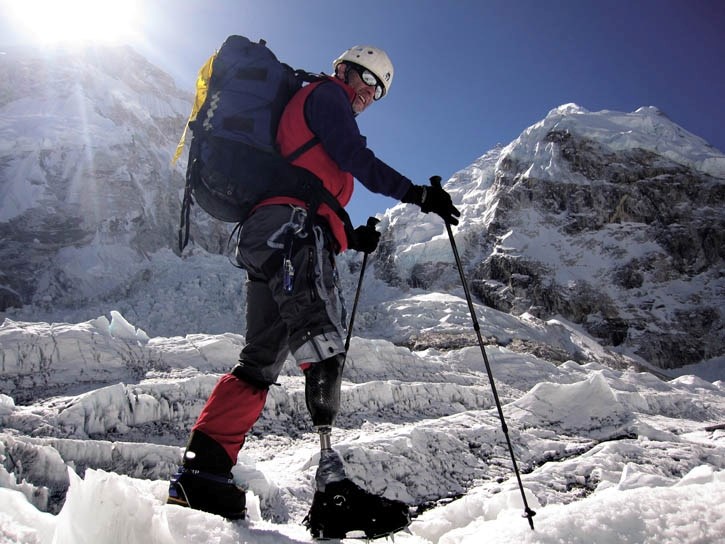 A Colombian climber tests the bounds of physical endurance as he heads up Mount Everest in Dianne Whelan’s film 40 Days At Base Camp.

The 2011 Banff Mountain Film and Book Festival takes off this weekend with the screening of seven feature films, as well as a number of shorts and other activities.

All screenings take place in the Eric Harvie Theatre at The Banff Centre.

Two premiere features by Canadian talent are 40 Days At Base Camp by Dianne Whelan (Saturday, 8:45 p.m.) and White Water, Black Gold by David Lavallee (Saturday, 3:30 p.m.). Both filmmakers will be present at the screenings to speak and answer questions following the films.

A compelling documentary of stories of climbers interwoven with daily life at the Mount Everest base camp, 40 Days At Base Camp is a film which provides a modern take on the transformation of Everest, from what was once a revered, sacred space to the mountain theme park it’s becoming, accessible to almost anyone.

“I went to Everest base camp for the first time in 2007 on assignment to write a feature for a magazine, and it was really a journey of disillusionment,” said Whelan. “I understand why people are drawn to the mountains and how that physical challenge of climbing a mountain can actually do as much for you inside as it does in terms of what you accomplish.

“But when I got to base camp, I was really dismayed. It didn’t look like I thought it would. There were a thousand people from around the world – it’s a town without a sheriff at 17,600 feet – and it looks like a Walmart parking lot with all these pieces of plastic, and tents everywhere on this dying glacier and rock.”

While there, Whelan heard stories of thefts, saw garbage everywhere and learned of the 250 dead bodies which litter the mountain.

“It was a bizarre scenario and what I realized was that the world’s highest mountain had been commercialized, and it’s an extreme tourism venture now,” she said. “My intent with the film was to spend 40 days there, because that’s the length of a climbing season, and I wanted to get there and film it and follow some people through that journey.

“I also wanted to reveal this story of base camp – what the place is, this community. The idea of calling it 40 Days was also that maybe it would make people think. I don’t tell you what to think, I just bring you to base camp and give you the experience that I had, day by day.”

The ambition to climb the world’s highest mountain is universal, she said, and there are people from around the world.

“It’s like a mini United Nations – you’ve got people from around the world, all driven by the same desire – plopped here where people shouldn’t be camping. It’s the world’s most inhospitable campground, yet here are all these people.”

The work is not a single issue film, she stressed, and follows a variety of intentions.

“I made a film about a place and the people at that place – it touches on climate change, on the garbage, on the fact that as the result of climate change dead bodies are popping up that died decades ago – it touches on a lot of things in this film, but really it’s a film about human ambition and I hope inspires some reflection. If I’ve done my job right, it’ll mean different things to different people.”

As a result of the film, Whelan will return to Everest in April to make an eight-part television program.

“There’s certainly a lot more to say about the place and the people there,” she said. “And climate change is just a small beat in this film – because I don’t really set out to make climate change films – but as it turns out, I’m choosing environments where it’s having a huge impact.”

White Water, Black Gold follows an imaginary drop of water from the Athabasca Glacier in Jasper National Park, down the Athabasca River and through the oil sands, discovering the environmental consequences of oil and the industry.

Lavallee is a former Canmore resident and has been working on the film since 2006.

“It started as my anecdotal observations as a hiking guide as to the rapidly changing state of the mountain snow pack and how it’s happening in human time, not geological time,” he said. “I found I was uniquely positioned to tell a story on this.

“I realized there was a scientific basis to what I was observing,” he said. “And then I learned these are the headwaters of where this massive industry downstream – the tar sands – gets their water from.”

As it turns out, quite a bit happens to that water downstream, observed Lavallee.

“I talk about glacial recession at the source, the ripple effect downstream, how changes affect river flow and how this industry is enormously a real water hog,” he explained. “Water that flows through is now no longer water, it’s in toxic tailings ponds, and then I try to answer the question of whether those ponds are actually leaking back into the eco system.”

With a long history in the Bow Valley, Lavallee has a strong attachment to the festival, and received a grant from it in 2007 to work on the film.

“I’m quite attached to the Banff Festival,” he said. “It’s pretty important to me, because I used to live in Canmore, so I’ve been coming to the festival for about 15 years. And it’s the most important festival for mountain-type films in the world.”

Currently, Lavallee is looking at educational and broadcast distribution for the film.

For more information on the festival’s events and activities, a full schedule can be found online at http://bit.ly/nyeFjR