“Since his teenage years, he has explored the rugged Coast Mountain Range, climbing over 700 mountains, many of them first ascents and making perhaps one hundred multi-week, long-distance forays across the icefields and along the ridges of what is one of the last true wilderness areas on earth. Shunning the easy path, John has forged his own way through some of the most rugged geography on the planet. He is a mountaineer and an explorer of the first order."
0
Aug 2, 2019 10:00 AM By: Lynn Martel 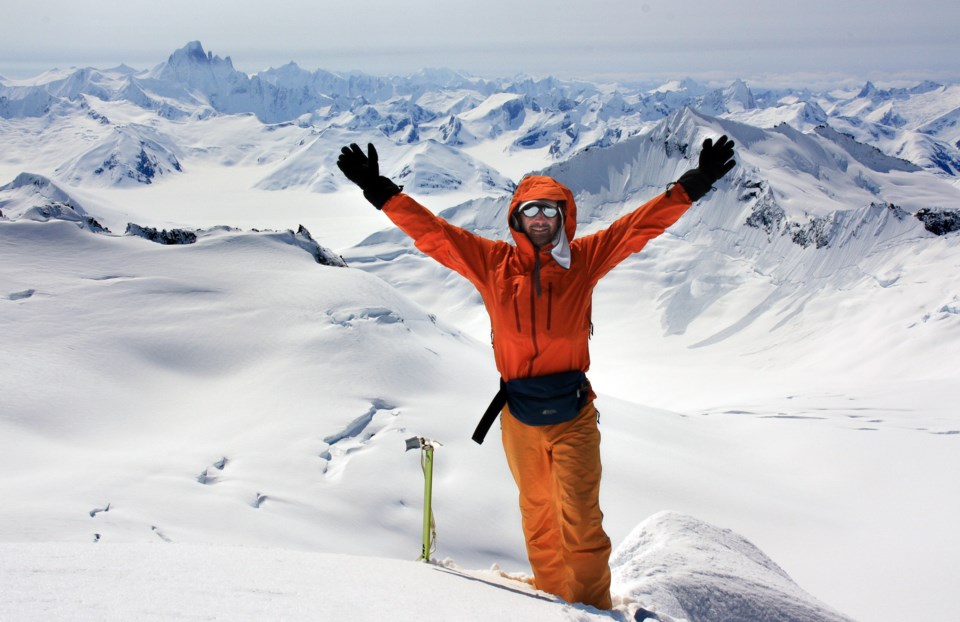 As a mountain explorer and a pioneer of long wilderness ski traverses and hundreds of first ascents in the Coast Mountains over the past four decades, Baldwin embodies the ethos of self-propelled, low-impact adventuring.

With those adventures, he has shared his enthusiasm and his passion for wild places, where he’s often spent weeks in areas that few, if any, have travelled, through several publications.

And it was his guidebook, Exploring the Coast Mountains on Skis, now in its third edition, White said, that first inspired him.

“It was the first guidebook I ever purchased,” White said. “I’ve been aware of his contributions to the coastal community and Canada’s mountain community ever since.”

In addition to his guidebook, Baldwin has produced eight custom topographic route maps for skiers and hikers looking to venture into different regions of the Coast Mountains.

But it’s in the sublime photography and thoughtfully written essays and personal impressions expressed in his two coffee table books, Mountains of the Coast and Soul of Wilderness, co-written with his wife, Linda Bily, where Baldwin’s passion and reverence for the beauty and the magic of high, wild glaciated landscapes illuminate the peace and the powerful emotions found in those experiences.

"Known affectionately to his friends as the King of the Coast Mountains, John Baldwin has spent his life in a quest to experience the West Coast wilderness,” said Chic Scott, who has been commissioned to write a biographical booklet on Baldwin.

The 25th in the Summit Series biographies published through the ACC, this is the third to be authored by Scott, who was himself named MGB patron in 2016.

“Since his teenage years, he has explored the rugged Coast Mountain Range, climbing over 700 mountains, many of them first ascents and making perhaps one hundred multi-week, long-distance forays across the icefields and along the ridges of what is one of the last true wilderness areas on earth. Shunning the easy path, John has forged his own way through some of the most rugged geography on the planet. He is a mountaineer and an explorer of the first order."

With his love of snow and winter and natural wilderness, Baldwin is actively involved in conservation issues, including sharing awareness of climate change and how glacial loss is happening before our eyes in western Canada, and how our ecosystem as well as the lifestyle of skiers and climbers are being affected.

With this, he encourages others to live more earth-friendly lives by buying less, flying less and changing everyday habits such as driving more fuel-efficient vehicles, using transit, buying green power and carbon offsets and spending more time at travel destinations per the amount of time it takes to travel there.

All these things combined, White said, makes Baldwin the perfect choice to be patron of the 2019 Mountain Guides Ball. The annual fundraising event is co-hosted by the Alpine Club of Canada and the Association of Canadian Mountain Guides, and each year a patron is honoured for their contributions to Canada’s mountain community.

The gala event includes cocktails, a gourmet dinner, dancing and silent auction with proceeds going to the ACC’s Environment Fund, which invests in mountain conservation. New mountain guides are also awarded their pins for completing the exams required to gain international IFMGA certification.

“The environmentalist in John really comes through in his writing and his photography,” White said. “He epitomizes the ethos of mountains for the sake of mountains, for the whole ecosystem.

“Explorer, photographer, environmentalist, author, John Baldwin is the perfect mix of mountain culture. It all comes together in one human. It’s a timely fit, he’s the quintessential fit as Mountain Guides Ball patron.”

The 2019 Mountain Guides Ball takes place on Oct. 19 at the Rimrock Hotel in Banff. To learn more or to purchase tickets visit www.alpineclubofcanada.ca or www.johnbaldwin.ca.