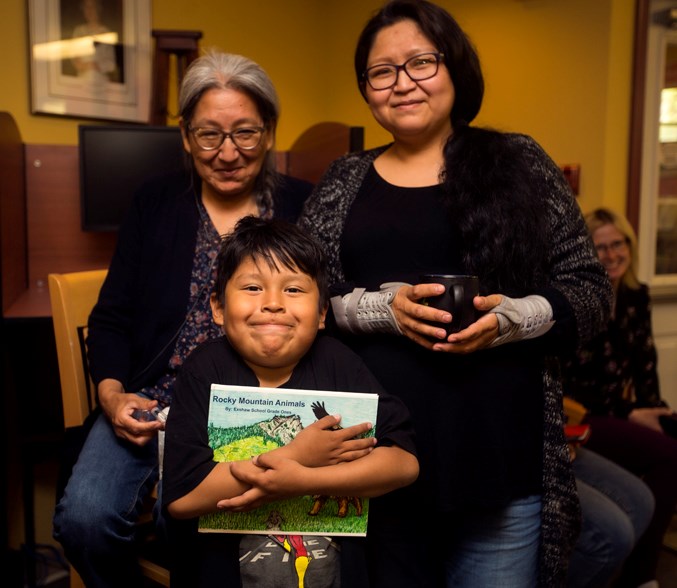 Grade 1 student Joey Chiniquay from Exshaw School proudly holds a bound book copy of his and other student’s stories at the Bighorn Library in Exsahw on Friday (June 14). Jen Smith, director of the Bighorn Library collected the stories and turned them into the book, which will be cataloged and available throughout the Marigold Library System.
A  bound, published book – a writer’s dream, or in this case, the surprise of an entire Grade 1 class. Six and seven year olds from Exshaw School were surprised last Friday (June 11) with their own individual stories and illustrations bound together in a beautiful hard cover book.   Cougars, bears and eagles were among some of the animals marvellously drawn by the students after spending their school year learning about wildlife and story writing with their teacher, Stacy Ramdyal.  “All year long we’ve been working in a writing workshop program where we’ve learned how to write a book,” said Ramdyal. “So it started off by just drawing pictures and then it evolved into writing a word into a couple words into sentences, so the non–fiction books that these kiddos wrote about were mountain animals. We live in a mountain community so we learn about these animals every year in our schooling.” Held at the Exshaw Library, the book launch was truly an event to attend. Aside from being surrounded by books, the atmosphere was filled with a purity it seems only children (or baby animals) can bring to the table. There were fruit trays, juice boxes, cupcakes, and pizza, among some very happy six and seven year olds and their prideful family members. Nalani Holloway, 7, who is very fond of green icing atop her cupcakes and is also a bit shy, nodded yes when asked if she had fun throughout the story-writing process, but became truly animated when asked about what animal she picked.  “I wrote about cougars,” she said, smiling widely before burying her face into her father’s sleeve.  Another student, Lyle Powderface, 6, had no trouble at all choosing his story’s main character.

“I wrote about eagles, cause it’s my favourite,” he said, half eaten cupcake in hand.

Meanwhile, Elias Hunter, 7, wrote about black bears and for a special reason.  “My third name is a bear,” he said, later excitedly adding that his grandfather gave him the name.  Ramdyal said a part of the writing process involved visitors from the Biosphere Institute of the Bow Valley, as well as a visit from a published author.  “We had people from the Biosphere Institute come in and teach us about bears and cougars and bison and then we were just very inspired to write our own books,” she said.  “We also met an author, she’s a Cree author, Neepin Auger, and she came into our classroom and kind of gave us the low down of what authors need to do before they write and publish a book. So meeting with the author, learning these writing skills and learning about our surroundings, we were able to make a beautiful mountain animal book.” Neepin Auger is originally from the Bigstone Cree Nation, located in northern Alberta. She’s possibly best known for her children’s book Mwaka – Talks to the Look: A Cree Story for Children that was published in 2006 by Heritage House. Now living in Calgary, Auger is also an artist and a teacher. She helped to inspire the students to write their own stories.  Alongside learning about what each animal does, for example that an eagle eats fish or that a mountain goat likes flowers, the students also added into the book the Stoney Nakoda name and pronunciation for each animal. A bear, for example, is watãga.

“All of the kids in the Grade 1 class live in Morely on the Stoney Nakoda reserve,” said Ramdyal.

“Often they’ll come in and teach me words that they’ve learned at home from their families in Stoney, so I thought bringing the Stoney word of the animal they learnt about into the book would just be a nice way to wrap in what we learned … One more fact about animals is that they do have multiple names, an English name that we learned in our books but also a Stoney name – these words were not new to them.”

In terms of how the topic was chosen, their Grade 1 teacher had little to do with that aspect. The six and seven year olds had their minds set on writing about the wildlife surrounding them.  “The kids had a really strong interest in animals,” said Ramdyal, adding with a laugh that on a visit to the Calgary Zoo, the kids wanted to go the Canadian wildlife exhibit first.  “Even though we live in the mountains, they wanted to go there to see their animals. When Kathleen saw a black bear she said ‘that black bear eats fish’ – she wrote that in her story.” This is the second time Ramdyal has had her Grade 1 students create a book. Last year, her students created storybooks that were paper copies. The books were then added to the library for safekeeping. This year, however, the women behind the scenes had other plans.   Jen Smith, a manager at the Bighorn Library in Exshaw, alongside Bonny Ryan, the librarian, worked together behind the scenes with Ramdyal to do something special for the class.  “Last year, Stacy Ramdyal approached me about doing a book launch party for her kiddos who had written books,” said Smith.  “They were just paper copies stapled together. And we saw the pride in those kids – just coming and getting a barcode on and how amazing that was. And so this year, thanks to grants from the Banff Canmore Community Foundation (BCCF), we upped our game.”  While the students worked hard on learning how to write a story, little did they know the plan to have their very own work bound into a hard cover book was in the works.   “They had no idea we had bound them in hard cover,” said Smith.  “They thought they were here to read their paper copies and have them put in the library like last year … So everyone is taking home a hard cover.” Smith and Ryan, though both very modest, very much helped to puppeteer the entire endeavour. In fact, Ryan, who also runs a program called Bonnybooks that works to get books into the hands of kids across the valley, actually illustrated the cover of the book, which Smith said she did without complaint and perhaps, also a little short notice.

“I’m pretty sure I gave her an hour,” she said through a laugh.  Meanwhile, Ramdyal said the next steps for the book would be a reading on National Indigenous People’s Day.  “We’ve been having a pen pal program with the Grade 1 and 2 class at Alpenglow School in Canmore, so our plan is to see them at National Indigenous People’s Day on Friday June 21 and we are going to share our stories with them,” she said.  “So this is one more thing that we have on our list to do with our books is to now read our published books to our Canmore friends.” When asked if the hard cover book idea was to be an annual tradition, Smith beamed with a warmness that practically wrapped you up in an embrace.

“Absolutely, for years to come, the looks on their faces – absolutely, absolutely worth it,” said Smith.

In terms of who helped with the launch party, the Exshaw Library board donated the fruit platters, Patrino’s Pizza donated the pizza, and the teachers baked all the cupcakes. If you want to check out the book, you can sign out a copy at the Bighorn Library in Exshaw.