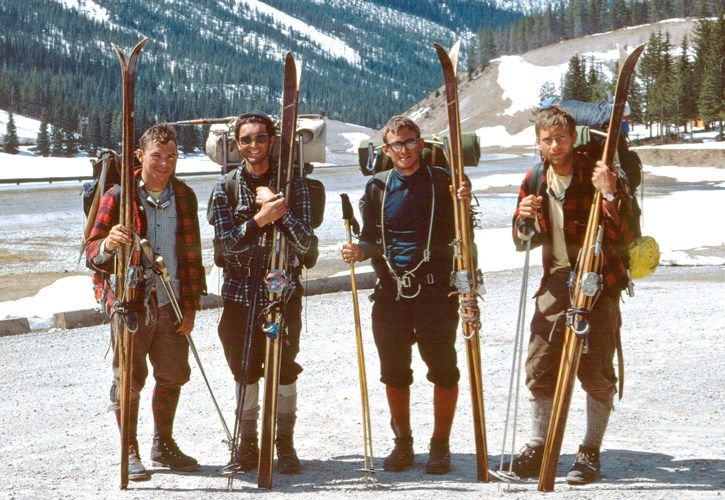 Chic Scott and his friends Charlie, Don and Neil before the 1967 Great Divide ski traverse.

That’s high praise, since it was mountain writer and historian – and first-rate storyteller himself – Chic Scott who used this description when asked why he chose Patton as subject of his next Fireside Chat, taking place at Banff’s Whyte Museum of the Canadian Rockies tonight (Oct. 25) at 7 p.m.

“I chose Brian because he is such a good storyteller and he was privileged to know so many old timers – Catharine Whyte, Bruno Engler, Lizzie Rummel, Pat Brewster, Ed Feuz, Lawrence Grassi,” Scott said. “When Brian came to the Bow Valley in 1967, he fell in love with the history of the place and spent many years collecting and telling Bow Valley stories.”

Arriving in Banff from the U.S., one of his early jobs was at the Banff Book and Art Den, the locally owned bookstore that was a cultural and literary hub of the Canadian Rockies, through which Patton immersed himself in the community.

Among his other varied jobs over the following years, Patton edited the short-lived Summit News, and also, for a short time, the Banff Crag & Canyon weekly newspaper. In the 1970s, he worked as a freelance broadcaster for the CBC, with a focus on environmental issues. Teaming up with Jon Whyte and Jim Thorsell, he taught a course titled Anatomy of the Canadian Rockies for the Banff Centre. As well, he worked as an archivist for the Whyte Museum.

But likely the accomplishment he’s best known for is partnering with Bart Robinson to hike more than 1,300 kilometres of backcountry trails in Banff, Yoho, Kootenay, Jasper, Waterton, Glacier and Mount Revelstoke national parks to research their irreplaceable Canadian Rockies Trail Guide, first published in 1971. Hiking an additional 4,000 kilometres over the next 15 years toward publishing second and third editions, they produced what is arguably the gold standard of hiking guidebooks – now in its ninth edition.

Patton didn’t quit there though, and has published nine books about the Rockies, with a new one soon to be published by Summerthought Publishing, sharing the stories of 100 major movies that have been filmed in the Canadian Rockies.

“Brian was privileged to live in interesting times and see Banff before commercial development went wild and the chain stores all moved in,” Scott said. “He’s done a lot, along with people like Jon Whyte and Bart Robinson, to keep our story alive.”

Tickets are free for members and $5 for non-members, but all seats must be reserved. Go to www.whyte.org/events for more information.