From opera hall to the pub

BOW VALLEY – From the concert hall to a small town bar, Opera Pub started back in 2014 and has been making the musical genre more accessible for people in the Bow Valley ever since.
0
Jun 13, 2019 12:00 AM By: Kiah Lucero 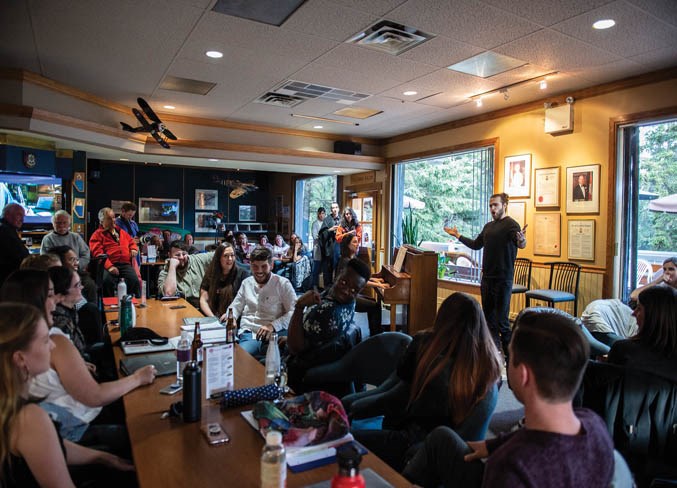 Opera Pub at the Banff Legion has been bringing performers and audiences together since its beginnings in 2014.

BOW VALLEY – From the concert hall to a small town bar, Opera Pub started back in 2014 and has been making the musical genre more accessible for people in the Bow Valley ever since.

Artistic director of opera at the Banff Centre for Arts and Creativity Joel Ivany is the creative mind behind the event. He said the only rule for Opera Pub is that when performers begin to sing, people have to listen and respond.

“The idea of opera pub … was basically just getting opera singers from their national opera companies mixing in with students in the conservatory singing with an upright, rundown piano in a very casual environment with people drinking beer and having fun,” Ivany said.

Ivany wanted to break down the barriers between audiences and performers, inspired by opera pubs in other locations like Norway. But first he needed a location.

Ivany wanted to find a bar that was authentic to Banff, somewhere not in the “tourist vein.” That’s when he discovered the treasure that is the Banff Legion.

“Someone suggested the Legion and once we walked in we knew that this was kind of the perfect venue for what we were hoping to accomplish,” Ivany said.

The idea for the Opera Pub in Banff was to create a more casual environment for people to enjoy the music and give performers an opportunity to interact with their audiences.

“It’s just people could have stereotypes for thinking that it’s traditionally inaccessible … this really breaks it down – the venue itself is not an ornate sort of concert hall, but it’s something that we all would feel familiar walking into and sitting down,” said Ivany

Jonelle Sills, who has been singing and studying opera for nearly eight years, has performed at the Opera Pub with Toronto’s Against the Grain.

“It’s a similar kind of vibe, everyone just wants to hear beautiful music, you feel accepted and excited … We definitely feel very welcome and invited to share your voices with people,” Sills said.

Like Ivany, Sills finds that there is an obstacle for people wanting to get into the opera music. With a full opera performance, the performers and audience are divided by a stage.

“You’re very separated from the audience. You’re on your stage, you’re in your costumes and you’re [acting] in a different time period, but in an Opera Pub, it’s very intimate. You’re very close to your audience,” Sills said.

The opera is also coming down the Bow Valley as the Banff Centre in partnership with the artsPlace collaborate for an Opera Pub in Canmore. Opera Night is on Friday (June 14) at 7 p.m. at the Banff Legion and the following night (June 15) Opera Night will take at the artsPlace from 7:30 p.m.