Homage to anniversary climb at Whyte 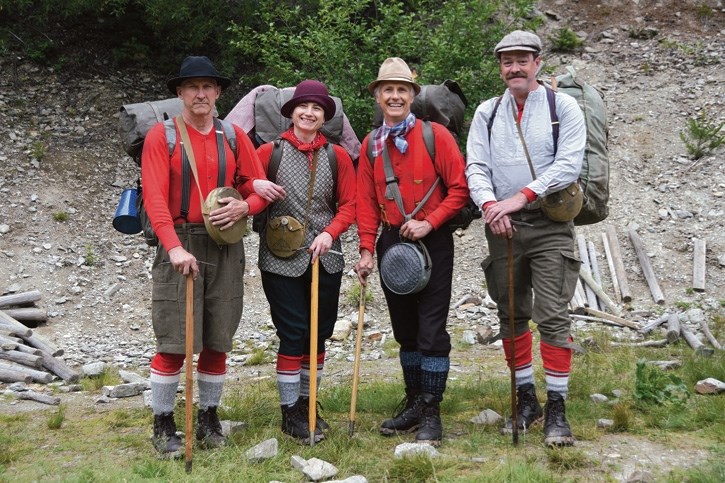 Located in British Columbia’s Bugaboo Provincial Park, the area is considered by many modern adventurers to be a world-class climb. Accompanied by first-hand accounts, the exhibition is comprised of 16 stunning photographs captured by the expedition’s official photographer and videographer, Petrov, while working together with film director Greg Gransden on a new documentary about the unique project entitled Hobnails and Hemp Rope.

The exhibition will be on display at the Whyte Museum to Jan. 29, 2017, with plans already in the works for a possible cross-Canada exhibition tour for 2017. The documentary will also be shown Dec. 11 at Canmore’s artsPlace (7 p.m., cost $10), as part of International Mountain Day.

“The project itself was the idea of one of the Alpine Club of Canada members from Toronto, Bryan Thompson, who led the project from the beginning,” said Petrov. “He likes history, culture and mountaineering and he got the idea of trying to reenact this climb since it happened 100 years ago. And why not try and get the original gear, similar ropes and boots, and see what it felt like back in the day.”

Initially, there was no plan to do a documentary film about the climb, that came later as a result of the serendipity of Thompson running into a filmmaker through a club event. Things came together along the way, with lots of interest from the public and organizational support.

“Our biggest supporter was the Royal Canadian Geographical Society; we were one of their official expeditions for 2016 and provided a good amount of the funding and financial support from the Toronto section of the Alpine Club of Canada and B.C. Parks as well who waived filming permits for us,” said Petrov.

The reenactment climb itself took place July 8-14. When Kain accomplished it a century ago it was accomplished at the end of August, but due to generally warmer summers and the snow and ice conditions being quite different 100 years later, the party had to advance the time frame to minimize the risk of rock fall.

“The conditions worked out very well, and we were one of the first mountaineering groups for the summer conditions were very good with two days of perfect weather with two summit attempts on Bugaboo Spire,” said Petrov. “The part most treacherous in the route is called Bugaboo Snowpatch Col, a quite steep and icy slope that needs to be navigated early in the morning.”

Four members of the team took part in the actual reenactment, including Thompson, Garry Reiss, Robert Le Blanc and Natalia Danalachi, who donned new replica boots very similar to what Kain wore out of safety concerns. The mountaineering axes, though, were original and held up to the task.

“For all the clothing and accessories, we got as close to the time period as we could; the hemp rope was also a replica rope and we purchased it for the same reason as the boots, out of safety, and the climbers did have harnesses on underneath the costumes,” said Petrov. “In some areas they couldn’t believe they did it in hobnail boots. It was pretty close to impossible and nobody knows for sure if they used another type of footwear along with the hobnail boots during the crux of the climb, the most technical section.

“When I heard about the project I jumped right on board, it was of great interest to me and allowed me to take my photography to the next level and bring together my love for the mountains and my love for photography. Then I was also asked to become the second videographer. I tried to capture the expedition in as complete a form as possible ... looking for interesting portrait photographs.”