Calgary metal-thrashers Illyrian (formerly known as Hellborn Death Engines) charge into Banff’s Hoodoo Lounge on May 2 as part of a Western Canada tour in support of their latest album Round 2: Fight! released in October of last year.
0
Apr 27, 2017 12:00 AM By: Rocky Mountain Outlook 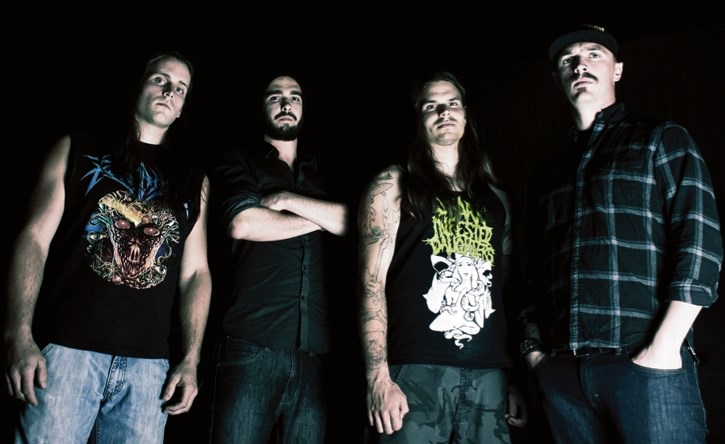 Calgary metal-thrashers Illyrian (formerly known as Hellborn Death Engines) charge into Banff’s Hoodoo Lounge on May 2 as part of a Western Canada tour in support of their latest album Round 2: Fight! released in October of last year.

Originally formed in 2011, Illyrian have righteously cast off anchors and let itself develop into a unique and hungry beast. This is, in no small part, due to the recent additions of Perry and May bringing a precision rhythm section to the speed-frenzy guitar work of Onofrychuk and McNeil.

“Jeff and I are pretty new, so we picked up the old songs for a bit and then it was pretty much straight into writing the new stuff for Round 2 Fight! Scott and Brandon recorded the guitars and put the whole structure of the song together and then that would go into a drop box shared amongst us,” said May.

The three other members are based in Calgary, with May staying fast and true to the Bow Valley. When it comes to rehearsing, the first thing they try to do is get through what the guitarists have laid out.

“We get that structured down and we play around with it, the pace and rhythms that’s what comes next,” May said. This leaves the rhythm section the chance to lay down a spine to the guitar work and it’s been a good formula, especially for the new album. Then lyrics are written, with McNeil penning most of the band’s diverse lyrics.

As an example, the band’s song “Technodrone,” is a slower pot-boiler May was inspired to create after a dismal airport experience.

“I was flying back from Victoria (B.C.) one day, and I was sitting in the Victoria airport, and I looked around and there were just people burying their faces into tablets and phones and I began to realize I was getting pretty agitated and angry about it,” May said.

“These people are probably really nice, but they’re being taken over by technology, so I wrote the lyrics to that and Brandon edited it out.”

May wants to continue offering creative output to the band, and agrees the group is a positive outlet for all four members. “I’d been thinking about putting shows on in the Bow Valley for awhile because the punk and metal scene is lacking and I think there’s a market for it too.”

Illyrian plays Hoodoo Lounge with West of Hell, Revenger and Human Stain Tuesday (May 2) at 8:30 p.m. Tickets $10, and available at Soul Ski and Ride, Rude Boys and Hoodoo Lounge; doors $15. Advance ticket can be ordered at [email protected] Age limit: 18 plus.