“As I got up and looked out my window, it was like a scene in a cartoon where time stops and both characters just stand completely still, looking at one another."
0
May 6, 2020 7:51 AM By: Jordan Small 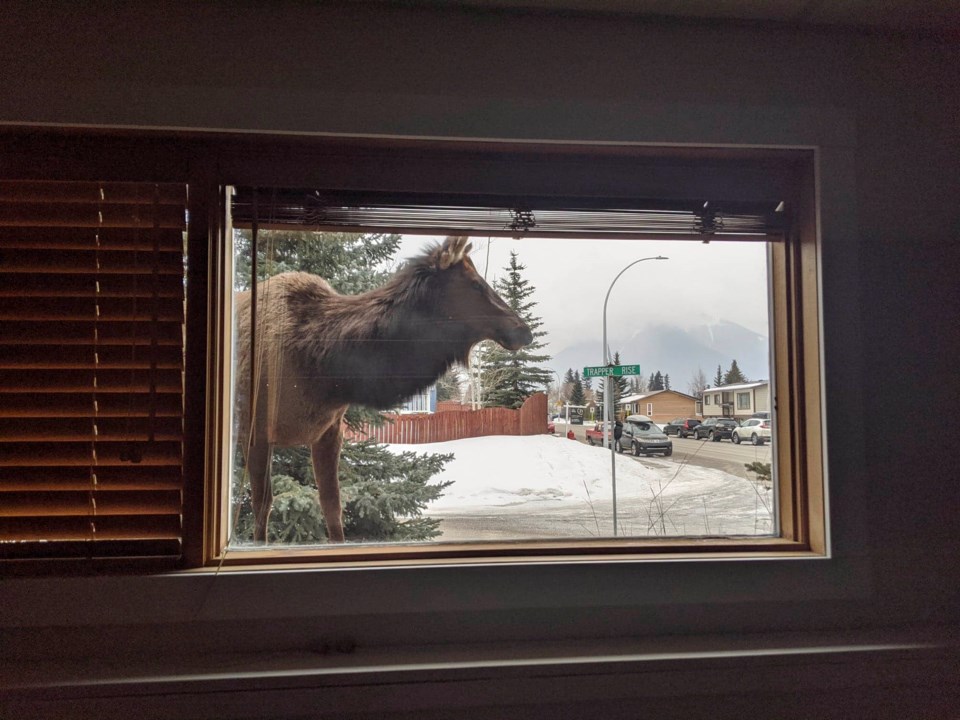 An elk peeks through Stuart McKelvie's bedroom window at his Canmore home. McKelvie shared the photo on a popular Facebook group, and then it was showcased in an article on an international website. STUART McKELVIE PHOTO

CANMORE – Hey, where’d you all go?

What looks like an elk’s curiosity getting the best of it turned into an online hit when Stuart McKelvie's photograph caught a glimpse of everyday life in Canmore from inside his bedroom.

While in quarantine at home, McKelvie posted the photo of the inspecting herbivore April 23 on the Facebook group, View from my window, with the caption “Town has become so quiet, the animals have started checking on us to make sure we’re doing OK".

“As I got up and looked out my window, it was like a scene in a cartoon where time stops and both characters just stand completely still, looking at one another,” McKelvie wrote to the Outlook.

“Thankfully my phone was in my hand, and I was able to quickly snap this photo as the elk turned away to find the rest of her herd.”

McKelvie’s photo was quickly picked up and used in an online article on BoredPanda.com a few days after the original post, where more international onlookers caught a glimpse of everyday life in Canmore.

As a photographer, McKelvie is amused that his most popular photo was taken on his cellphone camera, but he’s glad to have brought a little bit of joy to people’s lives during this time.

“The response to the photo has been incredible, I would say that amazement, and disbelief have been the two most popular responses to the image,” McKelvie wrote. “I’ve had friends from around the world sharing screenshots of my photo being posted into different Facebook groups, as well as on various apps and websites.

"Mum has loved it though, as she’s always telling me to share more of my photos from everyday life."

The picture of the elk, sometimes mistaken as a moose from online commentators, has given McKelvie an opportunity to educate an international audience about Canmore, its wildlife, and co-existence.

“Through further discussions in the comments section on the original post, this photo has given me the opportunity to promote the WildSmart influence, which guides us here in the Bow Valley,” McKelvie wrote.

“My hope is that the attention this photo and many others like it, have drawn from the international community showcases the appreciation and desire people have for living respectfully with wildlife.”