“There’s the magic. Nothing man-made can ever be as magical, as mysterious or as enriching for the soul as the miracles we experience in nature.”
Jan 14, 2020 12:00 PM By: Chelsea Kemp 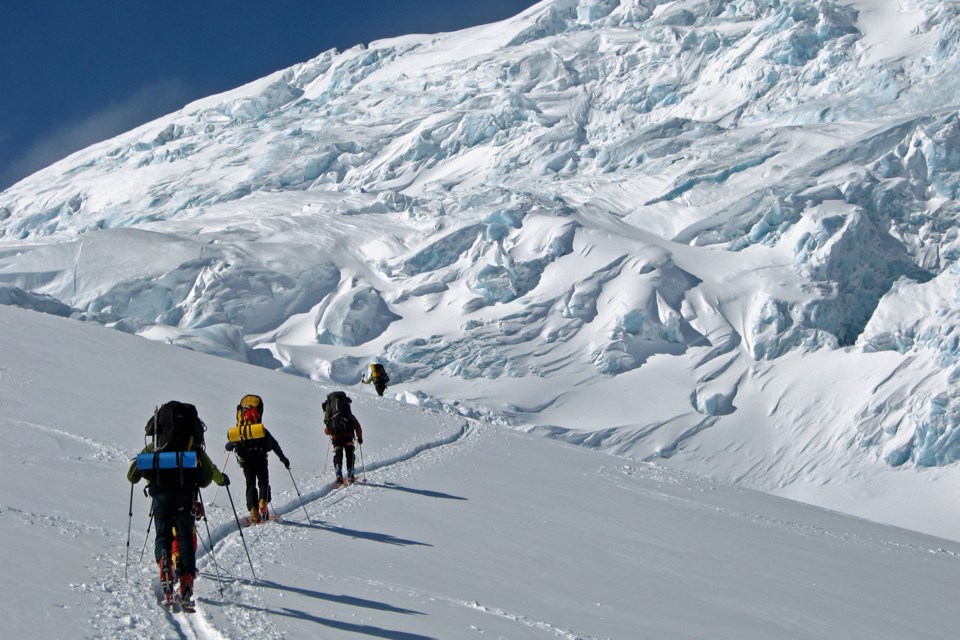 CANMORE – Offering audiences a sneak peek of her latest book Stories of Ice: Adventure, Commerce and Creativity on Canada’s Glaciers, Canmore author Lynn Martel will be hosting a presentation celebrating adventure at the Canmore Brewing Company in January.

The presentation Glaciers of Western Canada will detail the adventure section of Martel’s book.

“It’s all stories of how people have adventures and work and do science and create art," Martel said.

"It [the presentation] will be a whole bunch of adventures, a couple of my own, with lots of pictures. Hopefully people can learn a little bit about glaciers, but at the same time be totally entertained by the different adventures people have had on glaciers.”

Martel began writing in the early 1990s based on her life in the Rockies. Moving to the mountains from Montreal, Martel described herself as a “punk-rock disco princess” who could barely ski when she first arrived.

Her life was transformed in the Rockies and Martel soon began to embrace a life of adventure and purchased a mountain bike to explore her vast backyard.

Martel said she has continued to carry that passion and appreciates the extensive amount of knowledge, friends and stories she has been able to accumulate over the years.

During her presentation, Martel said she will share stories of where trips did not go exactly as planned and people ended up in crevasses, an imminent risk climbers face when exploring glaciers, paired with stories of fun and inspiring adventure.

“Stories tell us a lot about who we are. I’ve been having adventures here in the mountains for more than 30 years and I’m just scratching the surface,” Martel said. “You don’t have to be a world-class adventurer, or athlete, to go and have an adventure in the mountains.”

Martel described how she has always believed stories play an “essential element” in the human experience because they serve as a form of communication dating back to cave drawing.

“Stories tell us where we’ve been, and give us valuable clues and guidance in terms of how to approach our lives, and to solve problems, such as climate change and the health of the planet that sustains all life, including us humans.”

“I have gained so much knowledge from stories written and recorded by Canada’s mountain writers before me,” Martel said.

“I feel like it’s my job to record and share the stories of my generation for the simple reason that so many fascinating and interesting people help make Canada’s mountains a unique and special place.”

“Glaciers are just one piece of the amazing web of life,” she said. “There’s the magic. Nothing man-made can ever be as magical, as mysterious or as enriching for the soul as the miracles we experience in nature.”

Her countless hours spent in the great outdoors led Martel to realize how interwoven and connected everything in nature is, she said, and her presentation will highlight the need to keep that balance.

“If you pull too many threads then it’s going to fall apart,” Martel said. “There’s so much magic out there. Our wild mountains when you get 10 kilometres away from a trailhead it changes and you're really in the mountains, but when you ski up on a glacier you are out in that world.

“If the weather stomps in and something happened you might as well be on the moon. It could be days before someone can come to help you.”

One of the more startling revelations of Martel presentation explores how the glaciers of Canada have begun to disappear.

There are glaciers that she has spent time on that have already been transformed, Martel said, adding that maps from 25 years ago are already out of date given the rate these frosty giants are melting and the way the terrain is transforming.

“In my stories and in my interviews with people … it something that comes up again and again,” Martel said.

“It bums me out to know ice I sat beside last summer won’t exist when I return to that glacier next summer. It’s like losing a piece of home, a part of my heart. The exquisite ice sculptures that are part of glaciers – crevasses and seracs and caves – they are impermanent, so they’ve always melted in summer. But they used to have a chance to reform, and now they don’t, and can’t because human over-use of fossil fuels has made our planet too warm for them to survive … without glaciers storing our water, without old, mature trees filtering the air we need to breathe, how do we survive at all?"

Glaciers of Western Canada with Lynn Martel takes place on Thursday (Jan. 23) at Canmore Brewing Company from 7-10 p.m. The event is free to attend.

Martel's book Stories of Ice: Adventure, Commerce and Creativity on Canada’s Glaciers will be released by Rocky Mountain Books in the fall.