Spring is generally thought of as a time of renewal and it’s certainly true for Pine Tree Players. The community theatre company recently renewed itself by way of holding its annual general meeting and welcoming new board members.
Apr 13, 2017 12:00 AM By: Rocky Mountain Outlook 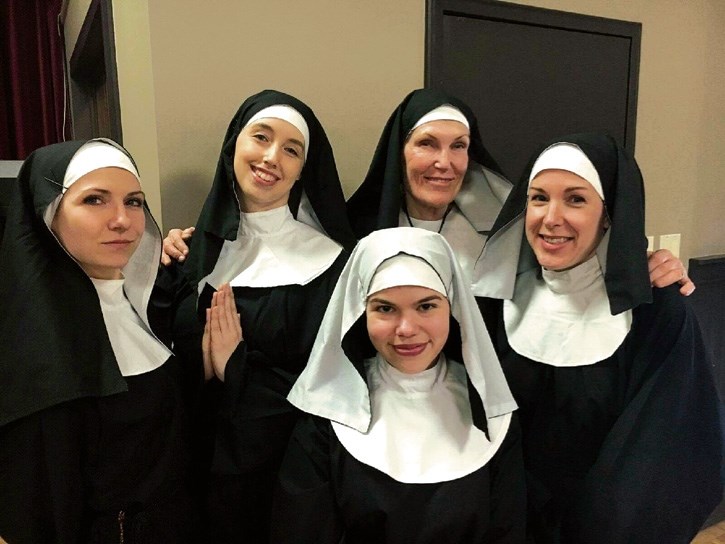 Spring is generally thought of as a time of renewal and it’s certainly true for Pine Tree Players.

The community theatre company recently renewed itself by way of holding its annual general meeting and welcoming new board members.

And, to make PTP performances more affordable for community members, the organization has renewed its fee structure.

For Nettesheim, who has lived in Canmore for three years, auditioning for Nunsense is a step well out of her comfort zone as a retired Grade 1 teacher – and she credits her appearing in the play to yoga.

“The way it transpired was, and I would never have auditioned otherwise, is I was at yoga and talking about the Valley Winds (which she has also joined). Jeremy (White) and Jenn (Tweddell) were there and overheard me and Jenn said she heard me talking and said, ‘why don’t you go audition for Pine Tree?’

“I’d been to some Pine Tree performances, and I said ‘sure, I’ll go’ – so it’s all because of Jenn (PTP secretary/treasurer).

“I wanted to get involved in the community and now I’m singing in a choir and a musical. It’s a brand new experience for me and it’s a lot of fun, but also stressful because it’s all so new.

“But the girls are a lot of fun and so great to work with. They’re all in their 20s and 30s and they’ve kind of taken me under their wing.”

Because Nunsense involved singing, choreography and voice coaching, Nettesheim said she’s found it to be a lot of work, along with other commitments in her life. The cast and crew have been putting in 15 to 20 hours per week in rehearsals and stage work.

“It’s a lot of work, but this is something new for me, and fun, and a community thing. I don’t enjoy the insecurities for my ego, but I’m meeting tons of new people and it can help you find out what makes a community tick.”

Morrison, on the other hand, became involved with Nunsense by way of a family tie – Elizabeth Green knows Morrison’s mother, who lives in Canmore.

“She called me out of the blue to ask if I could help and I said ‘sure,’ said Morrison. “I didn’t know how much work it would be, but they’re an amazing group of women and a fantastic group of actors.”

Morrison, a classical pianist, has been in Canmore for about a year, recuperating from an introduction to Canadian winter (a bad fall on ice) while immersing herself in the community.

She’s gone from performing in San Francisco’s Midsummer Mozart Festival to chamber music performances in New York to developing a studio in town for enthusiastic student pianists and getting some other creative projects off the ground.

“I’ve been playing, teaching, performing, adjudicating and studying music my whole life,” she said. “With Pine Tree, only about half of the woman could read music, so I’ve been working on that and on projecting the voice and vocal coaching.

“I have tremendous admiration for the actors and Elizabeth.”

As always, opening night, April 19, is pay what you can, but, beginning with Nunsense, there is a group discount of 20 per cent for 10 tickets or more (online tickets only at www.eventbrite.ca).

Further, PTP will set aside a dozen tickets per performance at 50 per cent off for those with an Affordable Services Program card, available through the Town of Canmore. These tickets must be purchased at the door, 30 minutes before a show.

Tickets are also available at the door, Café Books and Cellar Door in Canmore.