The wait is finally over; at least, that is, if you like monsters. And if you do, you’ll be pleased to know that Canmore-based Renegade Arts Entertainment has finally coughed up the latest installment of its hit, Dept. of Monsterology.
Oct 9, 2014 12:00 AM By: Rocky Mountain Outlook 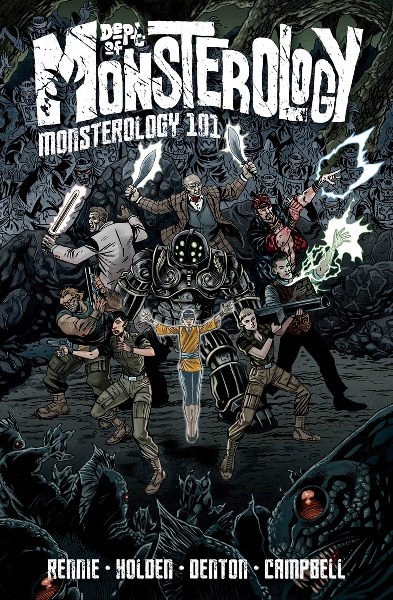 The wait is finally over; at least, that is, if you like monsters.

And if you do, you’ll be pleased to know that Canmore-based Renegade Arts Entertainment has finally coughed up the latest installment of its hit, Dept. of Monsterology.

One of the newer products this upstart comic and entertainment publisher is now offering, Dept. of Monsterology brings readers a story of monsters and magic and an unusual team of academics who find, study and sometimes eradicate these monsters and the secrets they guard.

Renegade has published four issues of Dept. of Monsterology so far and in that short span we’ve been treated to something unique. The scope and scale of this comic, in both the art and the story, is one of a kind.

Writer Gordon Rennie has built the script around mystery. He delights in suspense, unveiling enough about the people who comprise the Dept. of Monsterology to build an engaging story. P.J. Holden’s artwork, meanwhile, combined with Steve Denton’s dark and lush colours, builds on Rennie’s story, adding mood, intensity and action.

Rennie knows his monsters and Holden knows how to bring them to nightmarish life. Both delve deeper than most comics, or books for that matter, moving beyond the usual suspects: zombies, vampires and werewolves. They instead explore, and to great effect, monsters that are much, much scarier, darker and unique.

This is creative, imaginative and well-researched stuff, in both the scripting and the art. It’s not slapped together. The story reaches far, reflected by plot twists and foreshadowing Rennie offers at every turn of the page – he knows where he’s going and how he’s going to get there.

And with the latest installment in this series – Dept. of Monsterology: Monsterology 101, a soft-cover graphic novel – collects the first four issues together while adding a prologue and a new The Trouble with Harry.

Prof. Harry Wilmington is a living brain in the suit of power armour and Amelia Court is the brains that built the suit and this new story provides their backstory, while building on where the Issue 4 cliffhanger left off.

And to say the plot thickens would be akin to saying it gets dark at night or it gets cold in winter. Although I suppose if you live in the Arctic in summer or the tropics in winter neither would be true. Still, Rennie is finally offering up some answers, and yet, even as he does so, he’s proving to have an annoying habit: throwing in yet more twists that create more questions and leaves readers on the hook wanting more.

At this point, however, the only question that matters is when do we get Issue 5. Well, according to publisher Alexander Finbow, Dept. of Monsterology from here on out will be published as a graphic novel and we won’t see the next one until September 2015.

However and thankfully, Renegade is planning to release single issues digitally in the meantime until there’s enough to publish as a larger collection.

And in case you missed it, the hint of that secret is in the title of this upcoming comic, which is based on Burn’s supernatural poem Tam o’Shanter.