Morning Comes for Cuff the Duke

Despite the whimsical, euphemistic band name, Cuff the Duke is a serious troupe of old-school country music aficionados.
Oct 20, 2011 12:00 AM By: Rocky Mountain Outlook 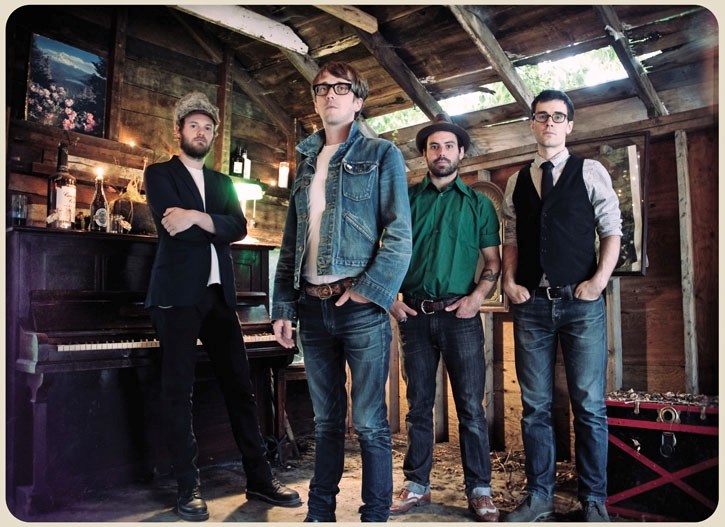 Despite the whimsical, euphemistic band name, Cuff the Duke is a serious troupe of old-school country music aficionados.

The band came together in 2001 and, over the course of the last decade has released five albums, with their newest, Morning Comes, hitting the streets Oct. 4. To promote the work, they’re touring across the country and will make a stop in Canmore on Oct. 27 at Communitea Café.

“It’s always a good time in Canmore, I love going there,” he said, noting the band has played the town many times. “We used to play the Canmore Hotel, and then the Communitea a year ago.

“I love that venue too, because it’s very intimate and we can be a little more dynamic with our set. We can play some of the mellower stuff that we don’t always play in bars, because people are actually sitting and listening, which is nice.”

“It was great, a lot of fun, a beautiful little theatre,” he said. “Hopefully some of those folks make the drive to come see us again.

“And (Canmore and Banff) are beautiful towns in the mountains – Ontario boys don’t get that too often.”

The new album, as with the previous one, Way Down Here, was recorded with Greg Keelor, co-frontman for Blue Rodeo.

“We really tried to take a step up with the writing, which is why there’s a follow-up, sort of a sister album, which will come out a year from now,” explained Petti. “Two albums that’ll go together, hand in hand, and I think anyone who’s heard our previous stuff should be into this album.

“It’s an extension of what we’ve done in the past, but kinda a big step forward for us too; a lot of exciting guitar moments and I’m really proud of this record.”

While Petti does the bulk of the writing, the band then comes together to arrange, make suggestions and hash out the songs as a group.

“Musically we’re trying to push it a bit – I think the songwriting’s as strong as it’s ever been – and the playing, we continue to grow as players, and I think that’s noticeable on the recording.”

Their sound is best described as ‘Canadiana,’ said Petti.

“There’s a lot of familiar sounds in it, there’s Neil Young elements, Blue Rodeo elements, and I think there’s things that are unique to us as well within the sound,” he said.

What they play is alternative country, he stressed, and not the new country which is so prevalent today.

“We have country elements, but it’s pretty much alternative to what popular country is today, which is bad ‘70s pop with cowboy hats,” said Petti. “Well, not all of it’s bad, but a good chunk of it is.

“So what they consider country now just isn’t what I like to consider country. Country to us is Hank Williams. There’s a tradition to country and an attitude that sort of changed over the years. But that’s what music genres do, they evolve and change, it’s just not our bag. We’re all big fans of country music for sure.”

It’s attitude that really defines the style, he said.

“Growing up we all used to listen to a lot of punk rock, and that early country, in our opinion, is kinda the punk rock of their generation,” he explained. “It’s simple, honest and the lyrics are heartfelt and meant something. They came sometimes from a dark place, sometimes a positive place, and structurally speaking the chords are simple, there’s all these similarities, so I really gravitated to it when I first heard it.

“Growing up in Oshawa there was not a country scene, so when I discovered it, it was very unique.”

Touring with Cuff the Duke is Hooded Fang, another Toronto-based band.

The lead member, Daniel Lee, is an old friend of Petti’s, who he knew long before the band started.

“Daniel, the main writer, is very gifted with pop arrangements, he really knows how to get that stuff across,” said Petti. “I think everyone will really enjoy them. And they’re starting to become a very popular band around here, so it’s only a matter of time before it spreads.”

Ahead of them is a long drive across Canada, with a tour which began in Ontario Oct. 1 and reaches Canmore on Oct. 27. After which they continue west to the coast, then head east again before finishing in Toronto on Nov. 26.

“It’s a bit gruelling – we’re starting the tour in Toronto and going west, so it’s a bit of a grind, but it’s just part of the life,” said Petti. “You gotta get through it.

“In more recent years we have laptops, so we can watch movies and stuff, and that kills the time a little bit. On our first tour we took like 12 CDs and a couple books and that was it. It’s still totally fun; if it wasn’t I don’t think we’d do it. We still have a great time and there’s a real camaraderie when you’re touring across with your friends and everyone’s getting along, it’s a nice experience.”

That said, Petti’s looking forward to the return to Communitea.

“It’s a great vibe there, she’s so sweet, so we’re really looking forward to it,” he said, referring to the venue’s host, Marnie Dansereau.