Opera fans will have twice the excitement to rave about this weekend. In addition to the new production of Lillan Alling, The Banff Centre will present the classic opera Cosi Fan Tutte, Friday and Sunday (Aug. 19 and 21).
Aug 18, 2011 12:00 AM By: Rocky Mountain Outlook 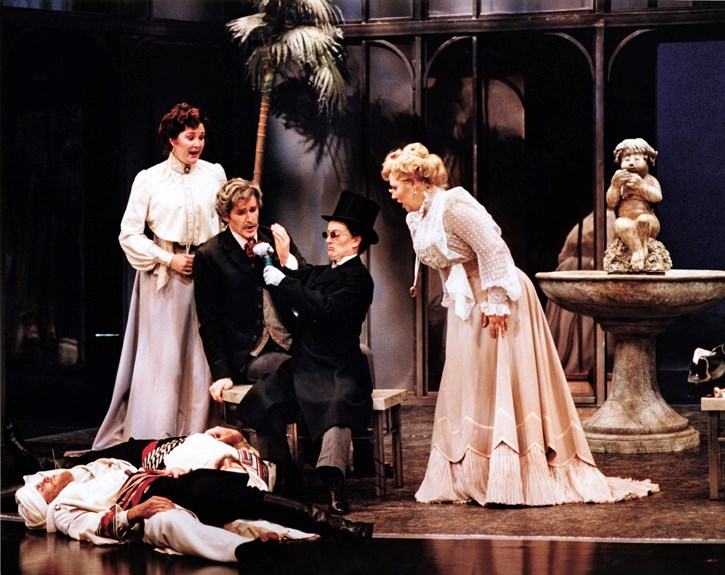 Mozart’s Cosi Fan Tutte is on the Eric Harvie Theatre stage, Aug. 19 and 21.

Opera fans will have twice the excitement to rave about this weekend.

In addition to the new production of Lillan Alling, The Banff Centre will present the classic opera Cosi Fan Tutte, Friday and Sunday (Aug. 19 and 21).

With a full title of Cosě fan tutte, ossia La scuola degli amanti, which translates as Thus Do They All, or The School For Lovers, the opera was created by Wolfgang Amadeus Mozart, with the libretto written by Lorenzo Da Ponte.

First performed in Vienna in 1790, this performance will be directed by Joel Ivany and conducted by David Agler.

Agler, who comes to The Banff Centre from Ireland, where he is the artistic director of the Wexford Festival Opera, spoke Saturday (Aug. 13) about the production.

“This is one Mozart’s really greatest operas – it’s his next to last one – and after it premiered, a year later he was dead,” he said. “It was an opera for which the music is just quintessentially Mozart – it’s full of his really great, most beautiful music.”

The story is largely of an older man who bets two young friends of his that their girls aren’t faithful, explained Agler, and the opera is about playing this game to see whether the girls are actually faithful to the boys.

“It’s a very simple story, but also one which I think every adult human being can slightly smile at from their own experiences,” he said.

Though the opera was written more than two centuries ago, it still holds much relevance today.

“Absolutely it does, all of us would see a little of ourselves in it, but that’s always the case with great works of art,” said Agler.

“Mozart was just simply one of the great geniuses of music,” he explained. “It’s hard to say what it is about his music, but the fact that it’s still around many years later… There’s a deep humanity in it, and in the midst of the most beautiful music, you would not realize that people can be angry.”

Mozart is a composer by which many people come to opera, he said.

“He has a way of expressing the human predicament in ways that are quite subconscious. It’s just music that has lasted because of it’s inherent greatness,” said Agler. “Many people probably aren’t aware of the amount of the music of Mozart which is used subtly in advertising and films.”

This year marks the first time in 20 years Cosi Fan Tutte has been performed at The Banff Centre, despite the fact that it ranks as one of the most popular operas of all time.

“We also were looking for a piece that did not use a lot of resources. There are only six principle singers in Cosi, whereas Lillian Alling requires a very enormous cast.”

While the decision to produce Cosi Fan Tutte was based on practical considerations, it was also because this is an opera many of the participants want to do, said Agler.

“Cosi is an opera which every singer wants to have in their repertoire, so it’s an opportunity for them which they’ll be able to use all their working lives,” he said. “The people who come to us are young people who are emerging into the business.

“Most are just finishing their graduate studies and they’re about ready to go out and go to work, so Banff provides them an opportunity to explore the professional life.”

The music will be provided by an orchestra composed of similar young professionals.

“While the opera program is going on, there’s a very large program for musicians,” said Agler. “There’s a piano workshop, there’s chamber music, two weeks ago we finished the orchestral program, and now the orchestra is for the opera.

“The musicians in the orchestra are very much in the same place as the singers who come to us – young people beginning their careers in music.

“We started rehearsing on the 4th of July, so we’ll be at it for a good six weeks.”

For those trying to decide which opera to see, Lillian Alling or Cosi Fan Tutte, Agler suggests both.

“Come see both, they’re just so different,” he said. “Lillian is in English, it’s a story which is intriguing, Cosi is from another time, but also in its way, very modern.”