What with the skirl of bagpipes everywhere, sheepdogs running around, wee lads and lassies dancing and the grunts of big guys emanating from the heavy sports competition, it’s hard to imagine a more fitting band than Mudmen to wrap up the 21st annual
Aug 25, 2011 12:00 AM By: Rocky Mountain Outlook 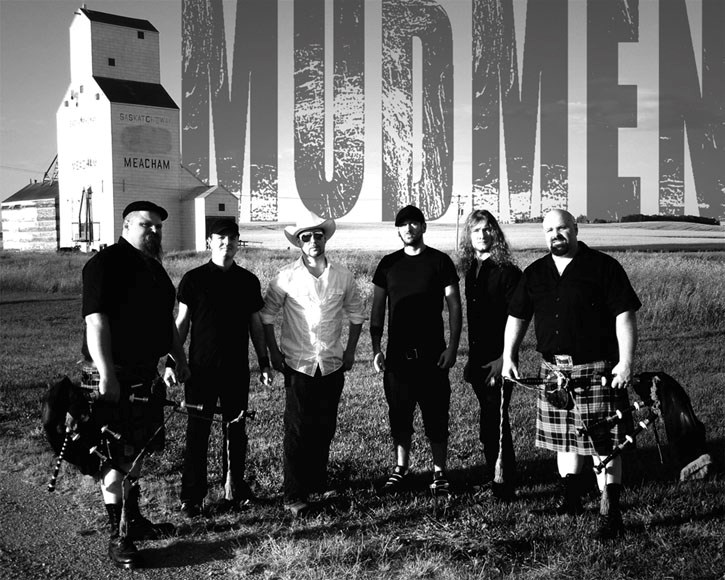 What with the skirl of bagpipes everywhere, sheepdogs running around, wee lads and lassies dancing and the grunts of big guys emanating from the heavy sports competition, it’s hard to imagine a more fitting band than Mudmen to wrap up the 21st annual Canmore Highland Games.

While Mudmen have enjoyed numerous visits to the establishments of purveyors of beverages in the Valley’s mountain towns, the Sept. 4 Highland Games is the six-piece’s first local festival gig.

The version which will play the Canmore games is more or less Mudmen version 3.0 – as it will feature three news faces, including the band’s third vocalist. The band now includes the Campbells, long-time guitar man Alex Maletich, and newcomers Travis Berlenbach (vocals, guitar), Steve Volk (drums) and Mario Bozza (bass).

Moving to a version 3 is appropriate as the band is also easing into a different musical direction, said Robby Campbell. The Mudmen of today is something of a kinder, gentler Mudmen – more suited to festival gigs.

“Guys get married, or step down, or whatever; the road’s not for everybody. We’re one of the few bands that can play a Hell’s Angels club, a festival or a country bar, without doing a 360 and putting on cowboy hats.”

While in the past the Mudmen sound was bagpipe-infused rock/punk originals and Mudmen-tweaked Celtic classics, the band has identified Celtic country as a genre which is open for exploration.

In the past, Mudmen have played their share of “push and shove, blood and teeth on the floor” gigs, said Robby. “But we recently played the Montreal Highland Games (and others) and it’s nice to be up there with an intelligent audience who really get the music.

“Sometimes people get on you about the sound changing, but we say ‘are you still with uour first girlfriend? Your first wife?’ Things change. It’s like a hockey team, if you have Scott Stevens, you play defence, if you have a Wayne Gretzky, you play offence.

“With Travis as our new singer, I think we have the ultimate lineup now and hopefully we can take it to the next level.”

That next level may well include securing a new record label. Mudmen were with a label some years ago as The Campbell Brothers, but management at the time pressed for a name change and sound with more rock and less pipes, clearly not befitting a band which, as Sandy Campbell has said, is on a mission to make bagpipes cool.

Having been indie since 2003, and now feeling the’ve got their sound nailed down, the brothers Campbell believe now may be the time to embrace a management team/label once again.

“Sometimes you need that management push behind you,” said Robby Campbell. “Social media is big and everybody’s using it, but the bands that are still making the smoke are still popular.”

Mudmen offerings range from Mudmen (2001) to Another Day (2010), with Overrated, Defending the Kingdom and The High Road in between.

Songs cover a wide span; sometimes quiet, sometimes onslaught, sometimes within the same song. They range from Mudmen-styled covers like “The High Road”, “Drink and Fight”, “The Fields of Athenry” and “Whiskey in the Jar” to originals like “Saturday” and “Another Day” and instrumentals like “Pipers Rant”.

Recently, Mudmen appeared on a KSPS TV fundraiser episode of a Johnny Reid concert from Halifax, the Campbells are the pipers you hear on CBC’s Hockey Night in Canada theme song, they played the Olympics and for Queen Elizabeth last year, they’ve opened for the Edmonton Oilers and last year played the Royal Bank Cup and Memorial Cups of junior hockey.

The Mudmen version of “Drink and Fight” is used on A&E’s TV show Shameless, “Lost” was used in a promo for NBC’s Black Donnellys and a Mudmen song was used as the theme entrance music for WWE’s The Highlanders.

Recording is now underway of songs which will be more in the “Another Day” and “Country Road” Celtic country vein. Mudmen are working toward a new album for the band’s typical St. Patrick’s Day release. New songs are being penned by the Campbells, by Maletich and newcomer Berlenbach.

In adopting a more family-friendly Celtic country sound, said Campbell, the band is hoping to tap into a wider-ranging loyal fan base. “Great Big Sea is not a country band, by they have airplay on CMT (Country Music Television)”, said Campbell. “Country music has a built-in fan base that’s loyal as hell and I think there’s a good opportunity to walk into the country music scene and leave our mark there.

“We’ve had an exceptional year this year playing highland games and Celtic festivals and and I think we have a sound that crosses genres. Hey, we even met the queen last year.”