CANMORE – Hilariously witty with a whole lot of movement – that’s how one might describe Pine Tree Players upcoming show, Rumours.
Apr 11, 2019 12:02 AM By: Alana MacLeod 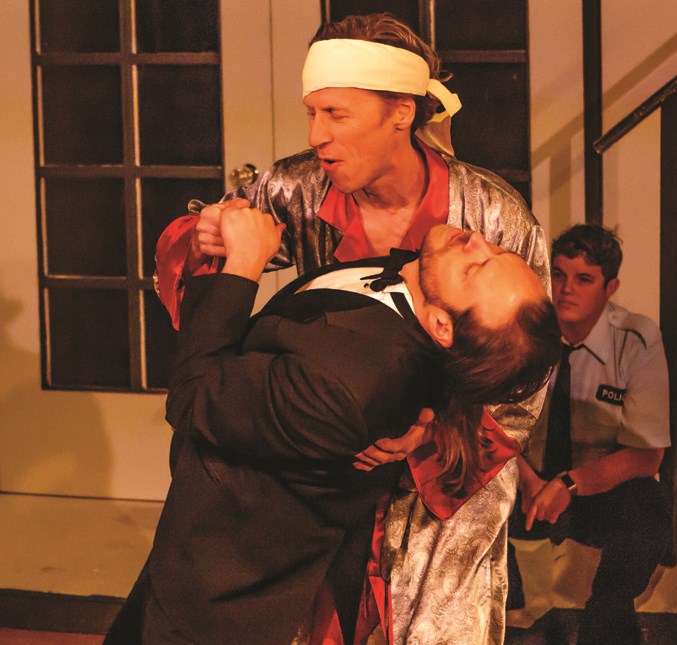 CANMORE – Hilariously witty with a whole lot of movement – that’s how one might describe Pine Tree Players upcoming show, Rumours.

Directed by Candise McMullin, also known as Miss Candy, with a cast and crew hand picked from right here in Canmore, the show promises to be full of passion and laughs with a few new faces gracing the stage.

“It’s always trying to move that many people at once on a stage that is confined without it looking like absolutely chaos.”

McMullin said she wanted to give some actors who may not be “Pine Tree veterans” a chance to shine.

“I have added a lot of fresh faces to the stage… I decided to go with new faces mixed with a couple people who are recognized,” she said, adding that though they may be new to Canmore, they do not at all lack experience.

“I’ve got incredibly talented people who just wanted to swing back into theatre, I scooped them up right away,” she said.

The premise of the play written by Neil Simon is essentially a dinner party gone horribly wrong. There are gunshots, ear lobe injuries, police at the door, vibrant colours and a lot of well-dressed people animatedly yelling at each other – truly all one could ask for in a performance.

Jeremy White, who plays Lenny Ganz and also helped to build the set, said it’s the comedic aspect of the writing that makes it such a fun show.

“It’s got funny, funny writing,” he said. “Some very good lines, I think. The content is fantastic and my fellow actors are also spectacular.”

McMullin added that the cast and crew had quickly become fast friends, creating a charismatic spirit on the stage.

“It’s so much fun – the dynamic that the performers get,” she said.

“They find amongst themselves during rehearsal, they end up being friends, they end up getting along more which makes the dynamic on stage better because everybody in this room, the eight main characters are best friends … It was really neat developing those characters together.”

The Outlook sat in on a portion of the groups rehearsal Monday (April 8) and the energy inside the Canmore Miners’ Union Hall was one that screamed of devotion, exuberance, and, of course, fun. Something White says he hopes inspires the audience.

“I think the quality of what we do here is high,” he said.
“I hope that it inspires people to keep coming back, I’m expecting a lot of laughs because it is a very funny play.”

You can catch the comedic performance between April 17-27at the Canmore Miners’ Union Hall. Tickets are 20$ and available through a link at www.pinetreeplayers.com.