“It’s tough being a musician right now because you’re not able to play and make money. If you were doing it just for the money, then it’s a really tough time. But if you’re doing it for the love of it, there’s still a lot of avenues that you can go down, even during these times.”
Jan 22, 2021 4:00 PM By: Jamey Glasnovic 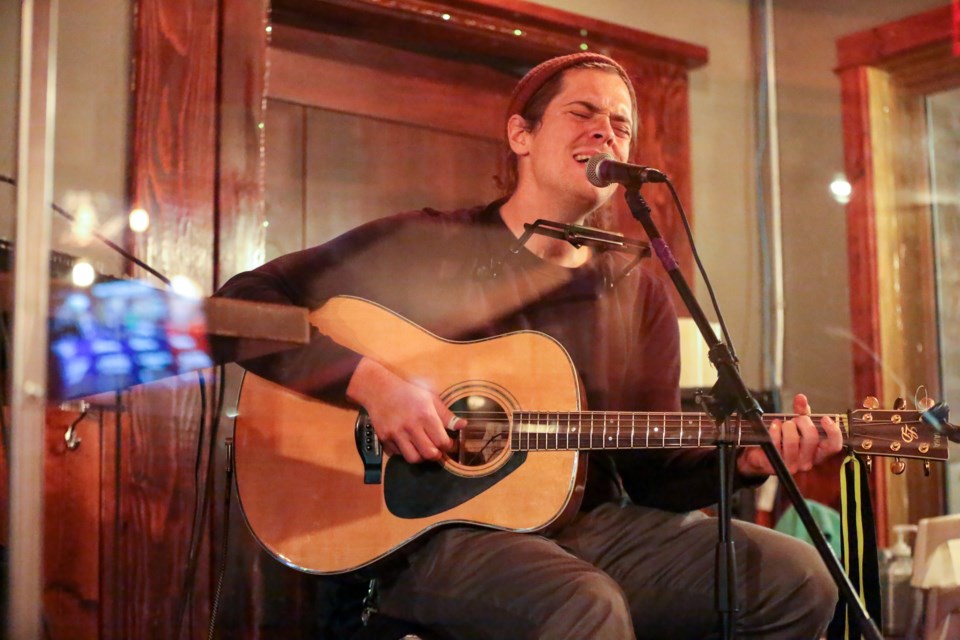 CANMORE – Jake Posacki has his irons in a lot of fires.

Pre-COVID-19, the musician and songwriter played live with a number of local bands, hosted an open mic night, did session work in studio, and also dabbled in music producing.

“I kind of fill in all the roles where I can. Playing guitar is my main thing, but sometimes I play piano and just sing here and there,” Posacki said, with an understatement befitting his soft-spoken, laid-back personality.

The pandemic has resulted in an ever-changing set of restrictions and lockdowns that have hit the music industry hard, but Posacki has still managed to contribute to a few projects when rules have allowed.

His main focus is with the band Zebra, but he played on a pair of tracks the Ramblin’ Hey, Ho, Ha’s released on Spotify, songs that he also recorded and mixed. He also performed a series of solo acoustic sessions in the short window of time when small, socially distanced live performances indoors were allowed under guidelines from Alberta Health Services.

“It’s tough being a musician right now because you’re not able to play and make money," he said. "If you were doing it just for the money, then it’s a really tough time. But if you’re doing it for the love of it, there’s still a lot of avenues that you can go down, even during these times.”

Another rare 2020 trip to the stage was as part of a house band with members of Northern Quarter, at the Bow Valley Cabaret show at artsPlace in September. But, with gigs few and far between over the past year, Posacki has taken the opportunity to turn his attention to writing songs and doing studio work with other musicians.

“When I went to university, I bought an interface,” Posacki said. “It’s a converter that changes analogue electrical signals that go through the microphone cable into digital data. It turns sound into code essentially.”

That technology laid the groundwork for Posacki’s interest in recording and producing, and with the technology of today, it has become a much easier process.

A little bit of talent, a few hours of YouTube tutorial videos and a $500 investment in equipment goes a long way to delivering quality recordings that are ready to share, which is an important outlet for independent and aspiring musicians.

Posacki references the success of Billie Eilish as an example of this type of musical workflow paying off big dividends.

For Posacki, what was a hobby on the side is getting more serious. The shared rehearsal space that he uses in Elk Run in Canmore now includes a small studio.

A Zebra EP and the Ramblin’ Hey, Ho, Ha’s releases were recorded there. In addition, upcoming EPs for John Van Hal and Mari Hill will be two more producer credits on Posacki’s resumé.

“It was kind of riding on the back of the live thing before for me, and now it’s kind of like the only thing,” Posacki said of the work he’s been doing in studio.

“If you have the space and the ability to use the computer to your advantage, it’s also a really good writing tool. I’ve probably written 50 songs in the last year and a bit.”

Some of the songs are more polished and ready to go, while others remain rough drafts to come back to in the future with his bandmates.

“I’m sure when COVID is over there will be a lot of people releasing stuff,” Posacki said, “and probably good stuff too. As a small example, a third of my working life is doing music, so it’s also still a passion thing. But even for me, it’s been a great time to create things."

With time on their hands, musicians across the board will probably have a backlog of material, but not everyone makes that transition smoothly.

“A lot of people I play with really struggle because there’s no outlet. They can’t go play,” Posacki said. “Some of it is income, some of it is the satisfaction of playing for people, but really good music, whether or not there’s a live performance, still exists. And there’s so many different ways to explore it.

“I’ve really been enjoying the production side of things and writing songs, because typically I don’t have time. All my time is spent working, and then at night going to play a show. Maybe this came at the right time for me to take things a little bit further and a little bit deeper in being more creative instead of just doing the live shows.”

Once the pandemic is behind us, Posacki plans to return to the stage. In the meantime, the Van Hal and Hill EPs are centre stage, and a new Zebra project is nearing completion and is expected this spring.