Just as three tall glasses of spicy cocktails were placed on the table, the minds behind Bow Valley BBQ began to describe their products’ flavours that triumphed at the World Hot Sauce Awards.
Jan 25, 2018 12:00 AM By: Rocky Mountain Outlook 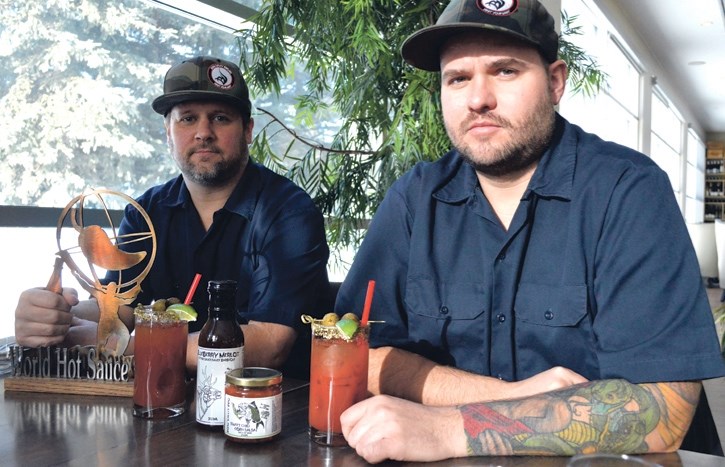 Just as three tall glasses of spicy cocktails were placed on the table, the minds behind Bow Valley BBQ began to describe their products’ flavours that triumphed at the World Hot Sauce Awards.

“For us, it’s always flavour and taste first and then all the other trendy concerns afterwards,” said Jamie Ayles.

The Canmore-based sauce company’s founder was spending Christmas Eve at his parents’ house when news broke about the two gold and silver medals Bow Valley BBQ won at the international contest in Louisiana, U.S.A.

“You never know how you’re going to fare (at the competition) because sauces and hot sauces are an everyday thing for them down south.”

Here at home, Ayles sat beside plant manager Chris Dean at a four-person table at Canmore restaurant Crazy Weed on a sunny January day in the snowy Rockies.

The two reflected on their recent international success while taking a break from producing award-winning sauces and mixes.

“We weren’t expecting three awards,” said Ayles with a laugh. “We believe in our product, but it’s super flattering and surprising to win those awards, especially (being judged) from people in our industry.”

With sauces that aim towards grilled meat and beef, a mainstay in Alberta culture, being given the golden nod of approval for the bold and deep flavour of the Blueberry Merlot Steak Sauce is validation of a worthy sauce.

“Our sauces have to be approachable to everyone and still have the heat, but not kill the food,” said Dean.

With the Sweet Chili Corn Salsa, it was the second winning year in a row in the specialty salsa category. It’s a sweet and hot mixture that melds well with seafood, fish tacos, pulled pork and anything salsa goes with.

And, last, but certainly not least, “with the Caesar, we wanted something that would compete with the premium brands and still has to have that familiar profile people are looking for,” said Ayles.

The recipe is basically from scratch, mixing in real vegetables, spices and Tamari soy sauce.

There are always ideas running around, however, now that some traction has been made in Alberta, one idea that has a clear path for Bow Valley BBQ is expansion.

Bow Valley BBQ’s first product hit the shelves back in 2013 and it’s been a forward march with five sauce/spice products, plus Caesar mixes (currently just in restaurants).

What’s next is a total jerk sauce releasing and expanding to east of Alberta and into the U.S. and China.

“Alberta exports a lot of beef to China, so our condiments go hand-in-hand with that,” said Ayles. “We like looking forward. Now, there is more momentum for us to get to the bigger goals.”

Currently, there are about 40 employees (some contract positions) across Canada working on Bow Valley BBQ products, which more than double compared to just over a year ago.

In 2015, Ayles purchased Canmore’s Boccalino Fine Foods, which is now the fastest growing Canadian line of fresh salad dressings. They just found out that the Boccalino brand, with its signature Swiss dressing, would be sold in 700 grocery stores west of Ontario.

“There‘s just one part with Boccalino, we’re going to be changing out (plastic) bottles to a glass bottle,” said Ayles. “The Boccalino bottle will be there in all the same places, it’ll just be a bigger glass bottle.”

For more information and locations on where to pick up the products, go to www.bowvalleybbq.com.