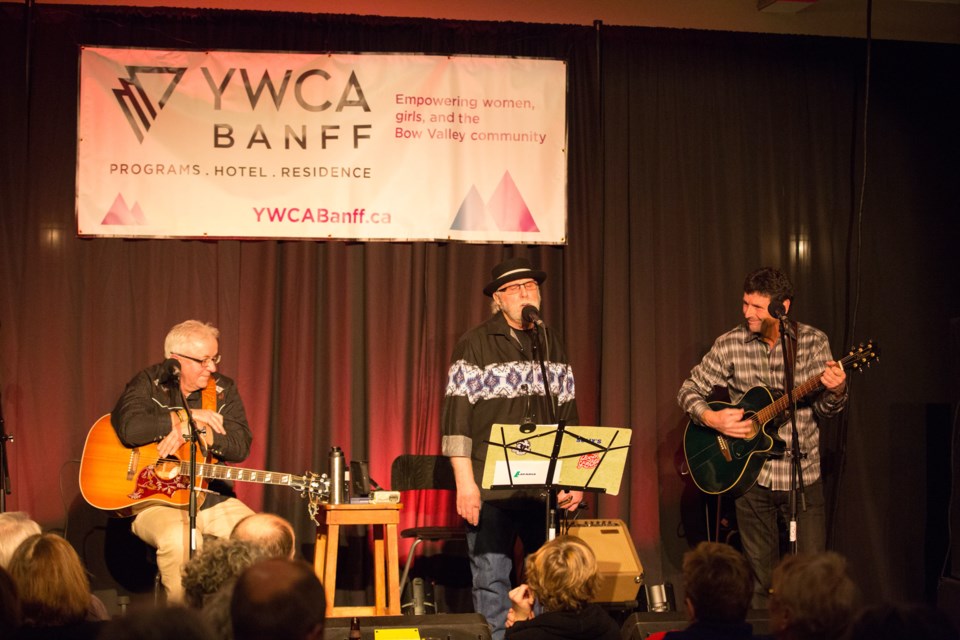 A previous performance at the Songs for Shelter concert fundraiser. Submitted Photo

CANMORE – Striving to help the YWCA Banff’s plans to build a women’s emergency shelter in Canmore become a reality, a trio of musicians will be hosting the fifth annual Songs for Shelter concert in January.

“The beautiful thing is we’re making progress,” Petroff said. “We can see headway. They [the YWCA] opened the Bridge House [transitional housing program] in Banff … and the one in Canmore, it’s going to be called Higher Ground, they’re procuring a place for it.”

He said time has flown since the charity concert was first launched and it has been thrilling to see the event become an annual affair. Petroff added that it has been great to play a role in supporting important YWCA initiatives that benefit the Bow Valley community.

His love of the people, music and the cause drive Songs for Shelter.

“I’ve always had this feeling that music is a bridge to almost anything,” he said. “With music, you can sort out a lot of stuff.”

Petroff said he first learned about the Bow Valley Women’s Shelter from his friend YWCA director of operations Steve Crotty. He explained that he asked to learn more about the shelter and was moved to do what he could to help after discovering the critical place it held in the community.

“Like many good ideas, it was inspired by a campfire and a glass of wine,” Petroff said with a smile. “I had no idea it existed, I had no idea what was needed. Like many people, it was an awareness thing, and I said, ‘What can a guy like me do?’ ”

His drive to support the shelter led him to establish the Songs for Shelter concert fundraiser.

The event soon found success in the community, Petroff said, adding that he is grateful for his gracious friends Pat “Sully” Sullivan and Gord March who will be joining him on stage to share their songwriting and musical skills.

“It’s old Canmore, there’s a lot of stories and joking,” Petroff said. “The three of us have known each other forever … It’s pretty comfortable.”

The trio spends the evening entertaining the audience with stories paired with folk music melodies.

Petroff said he is always struck by the stories of survivors he hears, explaining that while the funds they are able to generate through the concert are important, the awareness raised each year is priceless.

Songs and Shelter is an emotional and eye-opening evening for him because he often has had survivors come to speak to him and share their stories.

“I think the most heartwarming thing is … people come up to say thank you and say, ‘Here’s my story,’” Petroff said. “The more I dive into it, the bigger the learning curve.”

The stories give a human element to domestic abuse and help drive home why a shelter is needed in the Bow Valley better than straight statistics, he added.

The concert organizers are hoping to raise between $6,000 to $7,000 from the event, he said, adding he hopes there will be some corporate sponsorship.

“Every little bit helps if you can somehow contribute. We want to get people in the habit of donating their time, volunteering.”

Songs for Shelter takes place on Thursday, Jan. 9 at the Canmore Golf and Curling Club.

The Songs for Shelter venue sits just over 100 people and often sells out quickly, Petroff said, adding that he recommends people scoop up their tickets as soon as possible.

Doors for the show open at 6 p.m. with the concert beginning at 7 p.m. The concert features two 45-minute sets.

All proceeds raised by the concert are donated to the Bow Valley Women’s Emergency Shelter.