"Once you know the name [of a wildflower], you have established an intimate relationship with something that is inanimate."
0
May 12, 2020 10:00 AM By: Tanya Foubert 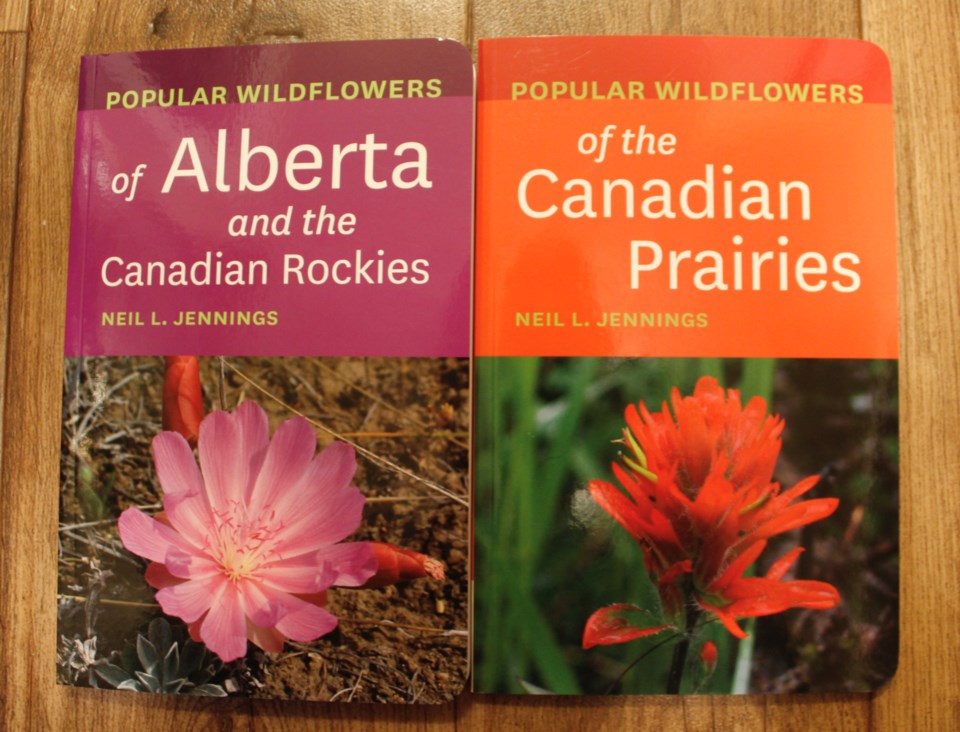 BOW VALLEY – Two of the latest guide books on offer from Rocky Mountain Books this spring will help connect Albertans with wildflowers in the Canadian Rockies and southern parts of the province this summer.

Author Neil L. Jennings said the two volumes are designed for amateur naturalists as a light-weight and easy to use field manual while out enjoying nature in the region.

"We decided what we would do is we would keep everything to 102 pages inside the covers and that would stimulate a lower price in terms of completing the book and it would also encourage people to carry the book with them," Jennings said.

The timing of publication during the COVID-19 pandemic with non-essential travel currently not recommended for Albertans since March 13 has been a concern for Jennings, a Calgary resident.

However, with provincial parks and recreation areas opening up for outdoor recreation at the beginning of May, there are still plenty of wildflowers in the blooming season to enjoy. Parks Canada, on the other hand, will keep its system of national parks closed to the public until at least May 31.

"The flowers are still going to be there and they will be there in exactly the same order and we will get through this," Jennings said. "it is really a question of how and when [reopening] happens, and how many people actually get out there."

Chief Medical Officer of Health Dr. Deena Hinshaw has encouraged Albertans to get outdoors and be active, but also asked people to maintain social distancing from others, even when out on a walk or hike.

"Spending time outside and enjoying outdoor activities is a great thing to do, both for mental and physical health," she said during a May 8 press conference. "But we need to do so while being mindful of each other's safety."

Southern Alberta is home to an estimated 400 blooming plants, including shrubs and forbs, with many hikes and trails offering opportunities to discover them. Depending on where you go, time of year and elevation, wildflowers should be in bloom from early April until late August.

Jennings' previous publications with RMB includes a wildflower guide for south-central B.C., and coastal B.C. and Vancouver Island. All four books are organized by the colour of the flowering plant – a concept the author came up with when he first began thinking through the project after publisher Don Gorman asked him to take on the project.

"[Colour] is the first thing people's minds key on when they see these plants in bloom and it made an awful lot of sense to me to put that colour code in there," Jennings said. "It is not foolproof, however, as some will have contrasting colours."

Having come to find his passion for wildflowers through being a former co-owner of a Calgary-based fly-fishing business, Jennings said the more questions he asked his partner about the plants, the more he was encouraged to pursue his curiosity.

"Knowing something about [wild plants] is useful information ... especially for those wandering with small children," he said. "A lot of plants, if you eat them, they are poisonous.

"It is a good thing to know which is which."

Jennings said he hopes by sharing his knowledge about wildflowers, it will cultivate curiosity and respect for them. One key takeaway from the books is that wildflowers are for appreciating within their ecosystem – not for picking to take with you, or transplanting.

Orchids that grow in the Rocky Mountains and southern Alberta, for example, often have a relationship with fungus in the soil. Trying to transplant them to a garden, or for a potted plant, will simply not work.

Some flowers if picked, will never grow back, like western wood lilies. Jennings said there has been a marked decline in that plant's numbers regionally, which has been connected to people picking them for their own enjoyment.

There is also the fact that in protected places like Alberta's parks and the national parks, it is illegal to remove or damage flora or fauna. In 2016, a woman was fined $500 for picking Calypso bulbosa orchids, also known as a venus slipper, in Banff National Park.

Jennings said by expanding your knowledge about the wildflowers in the region, it can foster a deeper appreciation for them in their natural surroundings.

"Once you know the name [of a wildflower], you have established an intimate relationship with something that is inanimate," he said.