The play's the thing for Pine Tree Players

While the Bard penned the words in the headline above a few years ago, the saying holds true today.
Mar 30, 2016 12:00 AM By: Rocky Mountain Outlook 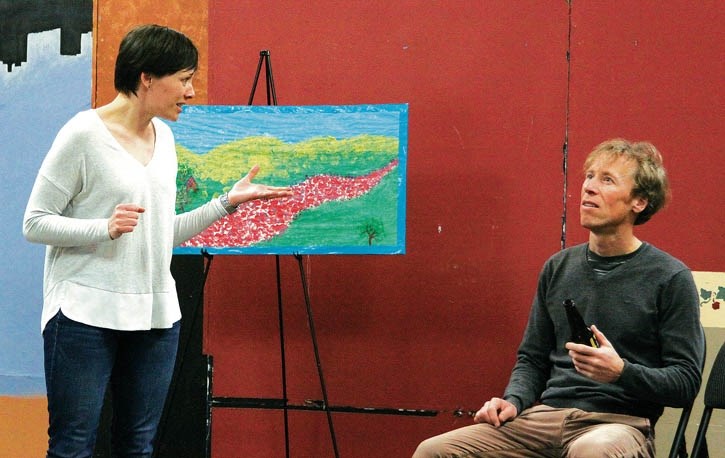 Jeremy White, right, as Miles, ponders Heidi Books’ (Lacy) explanation of her art during a rehearsal of My Narrator at the Canmore Miners’ Union Hall, Sunday (March 27).

While the Bard penned the words in the headline above a few years ago, the saying holds true today.

Today in the Bow Valley, mind you, the famous quote from Hamlet is not related to revealing a royal murder plot so much as it’s a general comment on theatre – Pine Tree Players’ theatre efforts in particular.

As we head into April, valley theatre aficionados owe it to themselves to pencil the following critical dates into their entertainment schedule – April 14-16, April 21-23 and April 29-30.

On those respective dates, truly the play’s the thing as local community theatre group Pine Tree Players (PTP) will have the Canmore Miners’ Union Hall positively bursting at the seams with activity.

Up first is Caught In The Act, The Sequel, an offering of five one-act plays over the first two weekends mentioned above. The plays will range from 12 minutes to 50 and will feature both PTP veterans and many newcomers to the stage; 18 in all, including directors.

At the end of the month, PTP will host the Alberta Drama Festival Association’s One Act Competition, which will include the local company and others from Cochrane (Vision Theatre), High River (Windmill Theatre), Nanton (Chinook Singers and Players), Okotoks (Dewdney Players) and Strathmore Theatre Players Guild.

“We started back in October,” said PTP’s Elizabeth Green, who doubles as both overall art director and director of Norm Foster’s one-act play My Narrator.

“Pam Milthorp, Elaine Smith and I read about 40 plays, decided on a number of them, narrowed it down to these and held auditions.”

“For many of these actors, it’s their first time on stage,” said Green. “For others, it’s only their second time; when I started this five years ago, that was the idea, to get more people involved. We also have a first-time director in Ron Deans.

“We wanted to encourage new people and there has been a tremendous amount of encouragement.”

Unlike the typical two hours, approximately, for a standard theatre offering, a collection of one-act plays means, “within a single evening the audience is offered an array of stories and characters with which to connect and be led into several different worlds,” said Green.

“These plays cover the stuff of life; you know, drama, farce, comedy and insanity.”

PTP’s one-act plays range from the romantic comedy My Narrator, where the two main cast members are accompanied by narrators who explain their life, to another romantic comedy, Naked, about a couple who meets through the Internet and embellish their lives, to a look at haves and have nots in The Lemonade Stand and a husband reluctantly giving his wife a driving lesson in Autumn Drive. The plot of Ada and Eric has yet to be revealed.

For those who can’t make it to PTP’s Caught In The Act event, the five plays will be re-staged in the One Act Competition, April 29-30, along with 10 plays by the competing theatre companies, for a total of 15 over the two days.

“One of the prime reasons for the one-act plays is to involve people who have never been on stage before to overcome their inhibitions and enjoy the fun of playing the part of someone else,” said Green. “The other is to get to know other community theatre participants from around our Foothills region.”

Adjudicator for the Alberta Drama Festival Association’s competition is Stephen Hair, who has played Ebeneezer Scrooge in Theatre Calgary’s A Christmas Carol for years.

Tickets for Caught In the Act, The Sequel are $20 at Café Books on Main Street and The Cellar Door (Benchlands Trail).