The year in adventure

There were many notable and noteworthy firsts for the Bow Valley's mountaineering community in 2019 and by the end of the year, alpinism was formally recognized by UNESCO as an intangible cultural heritage of outstanding and universal human and social value
0
Dec 27, 2019 9:00 AM By: Lynn Martel 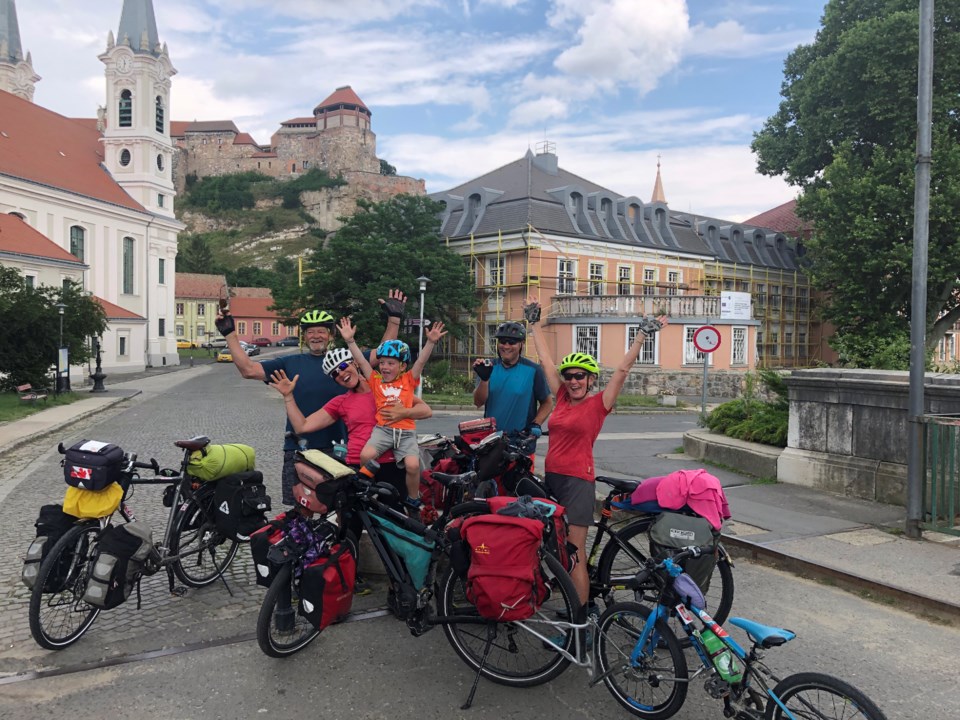 From the back row left, Tony Teunis, Mike Rosen and Donna Teunis, with Katrina Rosen (centre) holding her son, Zion 6, celebrate after crossing the bridge from Slovakia into Hungary at the town of Esztergom, marking 3,000 kilometres travelled by bike across Europe. Submitted Photo

Although a Google Earth mislabelling lead them to a summit a kilometre north of the peak of they were aiming for, Canmore’s Brandon Pullan and Joey Wallick climbed a new route up the north face of Mount Lady MacDonald via an ice pillar Pullan had spotted from a helicopter in 2006. Topping out and making the long descent by headlamp they named their route Agnes Ridge in recognition of the wife of Canada’s first Prime Minister, for whom the mountain is named.

While the tedious approach up a steep hill of waist-deep rotten snow led them to consider naming their new route Long Slog Little Dagger, after climbing a new 40-metre mixed rock and ice climb, Ian Welsted, Sam Eastman and Matt Zaleski decided to call their route, which faces west near the Weeping Wall area of the Icefields Parkway, Vacation in the Sun.

Canmore climber Will Gadd and photographer Pete Hoang teamed up with West Coast climber Chris Jensen to make the first ascent of Della Falls in Strathcona Park on Vancouver Island. Considered Canada’s highest waterfall at 440 metres, many have wondered if it ever completely freezes. After an hour-long boat ride, slogging in snowshoes for 14 kilometres and camping in -10 C temperatures, they were thrilled to discover the falls were indeed frozen.

The classic Rockies ice route Gimme Shelter, first climbed in 1983 by Kevin Doyle and Tim Friesen, has rarely been repeated. But one April day, the seven-pitch alpine route that forms directly under a large serac on Mount Quadra saw not one, but two parties climb it side-by-side, as Rockies climbers Jon Walsh and Pete Hoang roped up alongside Quentin Roberts and U.K. climber Tom Livingstone. Cold temperatures kept the serac intact while they climbed.

With the mixed rock and ice season still in swing, Niall Hamill and Ryan Richardson added a new route to the already existing lines up the north face of Mount Lawrence Grassi. Their successful ascent of the 300-metre route was accomplished just months after an earlier attempt resulted in Hamill falling and breaking his scapula. They named their route Canmore Swingers Party.

Veteran Rockies climber Andy Genereux added yet another new climb to his resumé with a 334-metre, 10-pitch bolted line up McGillivray Slabs near Heart Mountain. Completing the route he began last October, he boldly named it Old Man Rules.

A short drive to the west, later that month 2019 Summit of Excellence recipient David Smart tied in with Brandon Pullan to establish MacLab Slab in the Rundlehorn area of Mount Rundle. They named the 230-metre eight-pitch route for the Banff Centre bistro/pub.

Climbers found more than they expected when they discovered an unexploded ordnance – i.e. bomb - on Mount Athabasca. With the good sense not to touch it, the RCMP's explosives disposal unit partnered with members of the explosive ordnance disposal team from Wainwright Canadian Forces Base, and with members of the Jasper Public Safety team guiding the way through crevasses and avalanche-threatened glacier terrain they retrieved and safely detonated the device – which turned out to be from the Second World War era.

Also in August, over five days Rockies alpine master Ian Welsted teamed up with top Canmore-based alpinist Alik Berg to complete the first – and often pondered – traverse from the remote Athabasca River valley to the summit of North Twin on the Columbia Icefield.

Canmore climbers Zach Watson and Miles Adamson made the first ascent of a very difficult four-pitch bolted route on Grotto Mountain. Located on a steep limestone wall east of Echo Canyon, they named the route Boatswain 2: The Steepening.

In full view of town, Luke Green-Harrison and Justin Ward made the first ascent of an 80-metre mixed rock and ice route on Ship’s Prow high above Canmore. The ice feature has only partially formed before, and this season was no different, as the bottom section was bare rock. They named their route Devil with an Angel Face.

Rockies’ climbers Maarten van Haeren and Ethan Berman climbed a new route on Storm Mountain, near the intersection of the Trans-Canada Highway and Highway 93 South. They named their 700-metre alpine climb Eye of the Storm.

Calling their new route some of the best mixed climbing they’ve done in the Rockies, ACMG mountain guides Mike Stuart and Kris Irwin established a 195-metre rock and ice line in Protection Valley, near Castle Mountain. They named their route Superdark.

In recognition that alpinism is an art comprised of many elements: climbing mountain summits and faced by one’s own physical, technical and intellectual strengths; challenging one’s own capabilities and expertise while negotiating natural, non-artificial obstacles; evaluating and assuming measured risks; self-managing, self-responsibility and solidarity; and respecting other people and natural sites, in addition to its historical and cultural backgrounds, alpinism was formally identified by UNESCO as an Intangible Cultural Heritage of outstanding and universal human and social value at the UNESCO Inter-ministerial General Assembly in Bogota, Columbia on Dec. 19, 2019.

A Bow Valley resident for three decades, Lynn Martel has contributed articles to the Rocky Mountain Outlook about Canadian Rockies’ mountain adventure, culture and science since 2002. Author of Expedition to the Edge Stories of Worldwide Adventure and Tales & Trails: Adventures for Everyone in the Canadian Rockies, Lynn has also authored 10 Summit Series biographical booklets. When not at her desk she explores the backcountry by skis, boots and always with her camera. See her work at www.lynnmartel.ca.