CANMORE – Set to celebrate its third birthday on Monday (Sept. 24), artsPlace has so far met its original goal of becoming a central hub for the arts where all members of the Bow Valley can enjoy and participate.
Sep 20, 2018 12:00 AM By: Brandon Wilson 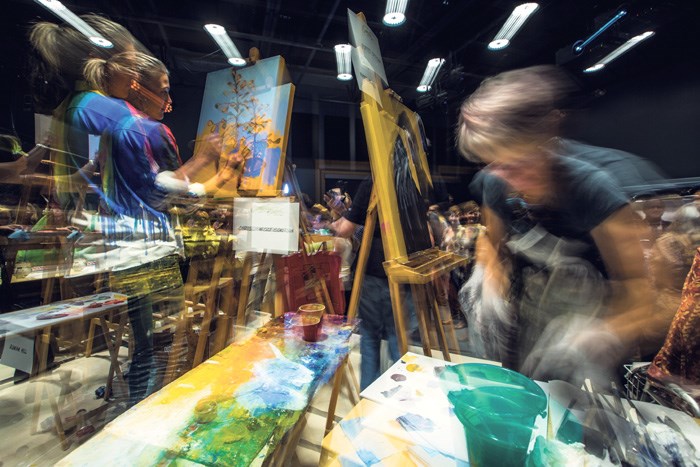 CANMORE – Set to celebrate its third birthday on Monday (Sept. 24), artsPlace has so far met its original goal of becoming a central hub for the arts where all members of the Bow Valley can enjoy and participate.

The third anniversary of the launch of the building coincides with Alberta Culture Days as well as the Canmore Festival of Art + Creativity which runs Sept. 28- 30 and features free community events and workshops for members of the public to drop in.

According to executive director Jeremy Elbourne, part of what has made artsPlace successful during its first three years is the ability for the centre to offer programming residents of Canmore find interesting.

“Even though we run completely at an arm’s length (from the Town), we certainly have a responsibility to be offering what the community wants,” said Elbourne.

In a 2017 report released by artsPlace, 20,532 people registered for programming, an increase of nearly 8,000 from the year before.

“What’s been really fulfilling for me is the number of community groups that have come and engaged with us,” said Elbourne. “Our hope was that we would really be a hub for the community … it’s important that this community has a place that they can come, and they can gather and tell stories.”

This community-focused approach to programming has won over some of artsPlace’s earlier detractors as well. Gerry Stephenson came to Canmore from the U.K. 50 years ago in 1968 to work in the mining industry. According to him, when artsPlace was first proposed he was totally against the idea of a taxpayer funded building to host the arts due to the cost of the refurbishment.

“It wasn’t that I was against an arts building, it was just that I wasn’t sure an older building like that should be where we spend so much of the taxpayers money,” said Stephenson. “But they did it, and they did a very good job.”

He readily admits he was wrong about the value the building could provide to the community, and has taken in multiple programs during the three years. At 87 years young, Stephenson says it’s a real boon to the community that someone like him can walk three blocks downtown and take in artistic shows from around the world through artsPlace.

“My very first visit, I walked in and I saw a notice of what was coming. And what was coming was opera from the Metropolitan Opera in New York, and theatre from all over the world and classic films that often weren’t on general release. And I just thought, Oh, this is wonderful.

“I think what artsPlace has done is introduce all kinds of new activities … they’re not changing the town, but they’re enhancing all the things we can do here without going to Calgary.”

Another member of the Canmore community who has benefitted from artsPlace is Jennifer Poirier. She was recently brought onto the team of program instructors at artsPlace for ceramics after rediscovering her passion for working with clay through their programming.

According to Poirier, artsPlace has fostered a close-knit culture of people working in ceramics in the Bow Valley, from hobbyists to those who want to take the art to the professional level.

“I longed for this facility for the years I was here before it opened,” said Poirier. “I was so excited about it opening because I couldn’t wait for the opportunity to get back into the art that I love.

“The opening of artsPlace truly means everything to me, because I quit my job on June 30 this year to pursue it (ceramics) full time.”

Although the facility is partly funded through the Town of Canmore, as well as with provincial and federal grants, artsPlace mainly relies on ticket sales and fundraising to bring programming to the building.

One way they help fundraise is through the upcoming fundraiser Creative Combat, which returns on Sept. 29. Creative Combat 4.0, as it’s called this time, is an artistic throwdown between participants to paint a work of art live in front of the crowd. Paintings are then auctioned off to help raise money for future programming. Tickets to the event are $50, and available through the artsPlace website.

ArtsPlace has also circulated a survey to better understand future programming the public would like to see in the facility. To take the survey online, visit the artsPlace website and navigate to the Arts News tab or, for a paper copy of the questions, visit the building.