"I wrote it to inspire people about change that is positive and you can make the best of it and life supports you."
Dec 26, 2020 2:00 PM By: Tanya Foubert 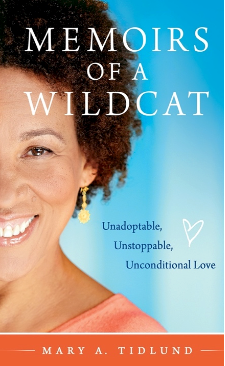 CANMORE – Mary Tidlund is a wildcat.

Unstoppable and unapologetic for a life lived to its fullest, the Canmore resident published her autobiography earlier this year to share her story of overcoming the odds that have often been stacked against her.

Tidlund said the early months of the pandemic in lockdown helped her finish the passion project to self-publish Memoirs of a Wildcat.

"I have been working on them for 10 years," she said in an interview with the Outlook. "With COVID-19, I was able to really get it wrapped up and to the printers ... it gave me extra incentive."

Over the past decade, she has been slowly going through the journals she has kept her entire life. Having a different life experience than many people, having been adopted at eight years old, she said her goal was to share her story and inspire others.

"I wrote it to be inspiring, especially during these times now," she said. "I have had a different experience with the way I was raised and the love I have been given.

"It is about connecting people and seeing the similarities between people and not the differences."

Tidlund was labelled as "unadoptable" because of the colour of her skin. Her story is also about trusting her own courage and pushing past stereotypes to make her own way in the world. She was the first black woman CEO in the energy industry before establishing her own charitable foundation to support women and children around the world.

Her oil company, which was based in southeast Saskatchewan, Williston Wildcatters Oil Corp., led to the name of her memoirs. Along with her business partners, Tidlund's company pioneered a new technology called horizontal drilling.

It was high risk and they drilled in areas where no one had found oil yet, which is why the technique is called wildcatting.

For Tidlund, being a wildcat is about being unconventional and following your purpose in life, even if that means changing things up and starting over.

"It is about purposeful leadership," she said. "It is about transformation and how you can do that and turn it around. It takes a lot of personal work to do that.

"I wrote it to inspire people about change that is positive and you can make the best of it and life supports you."

Many of the paths she chose to pursue in life were things she said were not typical for a woman to do, especially a woman of colour. But her successes and failures in life led to the message that comes through in her memoir, that you can do anything you want to do.

"Your purpose keeps unfolding," she said. "You can change through your life and your purpose will keep unfolding in those changes."

After her energy company went bankrupt, Tidlund was looking for a new direction in life. A friend asked her if she was interested in looking at a condo in Canmore – which she ended up buying. That was 20 years ago.

At the time, she was looking for work in the valley with a focus on giving back. But she realized she already had the experience and ability to start her own charitable organization.

With her drilling company, she managed to raise significant capital and reinvest it. Some of that work involved community development projects in the region they were operating in.

That experience helped her start the Mary A. Tidlund Foundation. She said she was able to take that experience and use it to invest in projects around the world that empowered women and children.

"We operated in Canmore for 20 years, but I ran it pretty quietly, though," she said, adding a lot of her efforts were to invest in programs and initiatives in 29 different countries.

Locally, her foundation was supported by the annual Rocky Mountain Soap Company run each May, did work with the Stoney Nakoda First Nation and supported the Shoe Project as well.

Travelling a lot over those two decades, she said the time came to step away from the foundation and focus on her next steps. It meant the foundation's work was wrapped up for good.

Tidlund said throughout her life, she has encountered synchronicity – situations and people that have raised or helped her. It has taught her to see the value of connection with others.

"There are definitely some bumps in there, no question," she said. "But, overall, it has been incredibly positive."

Tidlund was born in Calgary, but her birth mother, originally from Holland, put her up for adoption. When Tidlund was 19 years old she won a beauty pageant and her picture was published in the Calgary Herald.

Her birth mother saw the photo and kept it tucked away.

"She said she thought she had seen herself in the picture – in my cheeks and in my facial structure – and she clipped it," she said.

When they reconnected 30 years ago, her birth mother realized the young woman in the clipping was in fact her daughter.

It is just one of the powerful and inspiring stories of the power of unconditional love that Tidlund shares in her book.

Memoirs of a Wildcat is available online through Marytidlund.com and at Café Books in Canmore.