Tuesdays With Morrie brings death, humour and a bond to stage

CANMORE – Tuesdays With Morrie involves the subject of death, but it’s not quite the story within the play coming to Canmore’s artsPlace this weekend.
0
May 10, 2018 12:00 AM By: Rocky Mountain Outlook 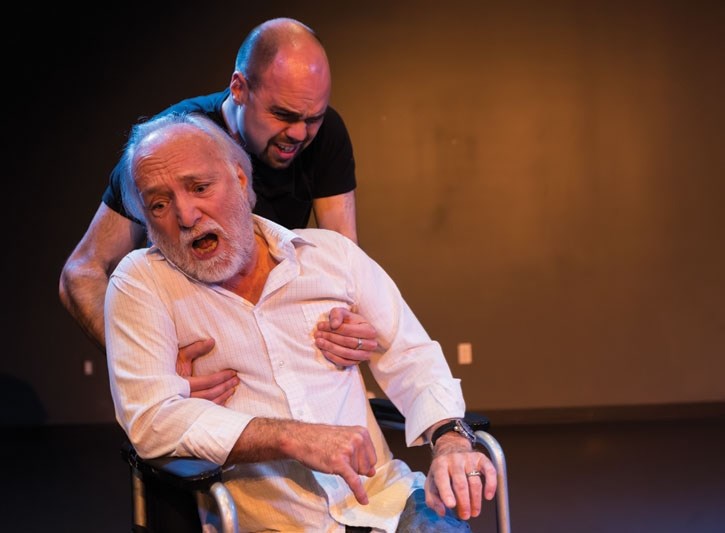 Richard Michelle-Pentelbury, left, and Rob Murray act out a scene from Tuesdays With Morrie at artsPlace in Canmore on Friday (May 4). The upcoming play features Michelle-Pentelbury as Morrie Schwartz, former college professor of hardened journalist Mitch Albom played by Murray, battling his final days with Lou Gehrig’s Disease.

CANMORE – Tuesdays With Morrie involves the subject of death, but it’s not quite the story within the play coming to Canmore’s artsPlace this weekend.

Instead, it’s about a bond between two men finding each other after years apart and, as actor Rob Murray says, “When they needed each other, they found each other and really had something special there.”

After a 16-year absence, the two are reunited when Albom discovers his former professor has amyotrophic lateral sclerosis (ALS or Lou Gehrig’s disease) and goes to visit with him, which turns into a weekly jaunt.

After reading the script, director Doon Wilkins was deeply touched and called it “the best script he’s ever read.

“It’s a play where you leave feeling like you’ve been through a very human experience,” Wilkins said. “It’s a spiritually hopeful play and integrates the humour, the lightness, the playfulness within this fairly heavy subject that makes it a masterpiece.”

The onstage presentation is minimal, with no set, no props, a wheelchair, a piano bench and two actors.

Actor Richard Michelle-Pentelbury will play wheelchair-bound Morrie for the 68th time. His first role as the real-life character was in 1997 and, as he put it, he hadn’t heard of ALS at the time.

“Since the play is about their relationship, the more important factor is the impact ALS has upon all those who are afflicted by it; not just the men and women afflicted by it, but their spouses and partners and families because it’s an ongoing brutal disease for which there is no cure,” said Michelle-Pentelbury.

ALS is a paralyzing disease and over time the muscles of the body break down, which leaves the person without the ability to walk, talk, eat, swallow, and eventually breathe. Eighty per cent of people with ALS die within two to five years of diagnosis, according to www.als.ca.

Perhaps the best-known person with ALS was cosmologist Stephen Hawking, who died at age 76 in March 2018.

Murray, who plays Mitch, has a whole new appreciation for Morrie and the “powerful messages he left” while preparing for his paired role.

“I’m the guy with a family and I’ve got two jobs and always on the run and working, so sometimes it’s tough to slow down and appreciate what I have and the things that are around me,” Murray said. “If a person takes away anything from this show, it’s that you just have to appreciate every moment in life, and the people in your life, and live for those people and just be the best person you can be.

“It’s sad, but I don’t think that’s going to be the predominate emotion people would leave with; it’s something worthwhile.”