Zebra's debut EP find the groove between funk and rock 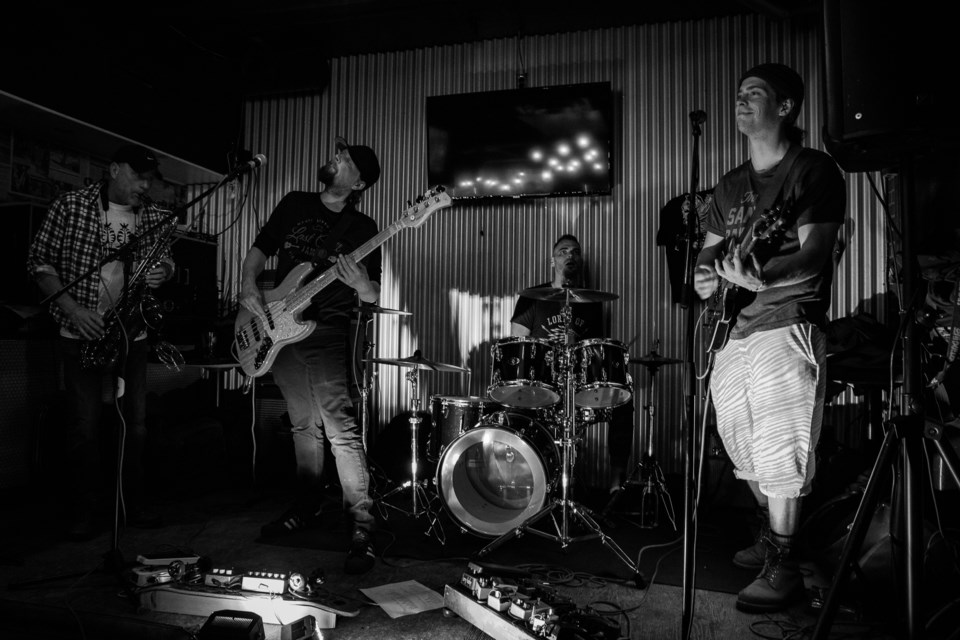 CANMORE – Pairing the bass with the brass, local band Zebra is ready to release its debut EP.

It has been exciting putting the new EP together, band member Jake Posacki said, explaining that it proved challenging to create the record because it took countless hours of research to figure out the best ways to put the tunes on wax.

“It probably took longer than we expected,” Posacki said with a chuckle. “Now that it’s finished, it’s cool and we’re ready to get the next thing going.”

He added that it was a good experience because the band was able to learn critical skills to put to use when making its next record. Zebra members include Posacki on guitar and vocals, Joe Ernewein on saxophone and synth, Gavin Boutet on drums, Wade Hunter on drums and Mike Kragt on bass and vocals.

“For most bands, recording has been something that costs a lot of money and it gets expensive,” Posacki said. “Nowadays there’s a lot of boundaries going down, so people can just record their own. It’s accessible for everyone.”

It took the band about six months to put the EP together between organizing the group together for jam sessions and figuring out how the record would be mixed.

The EP features the first four songs the band wrote and performed together, including one written by bassist and vocalist Kragt.

“The first song 'Drive All Night,' Mike [Kragt] wrote that one … for the band because we started playing a lot of covers,” Posacki said. “He sort of thought, ‘I should write a song and kind of kick this into the next gear.' ”

Writing its own songs helped bring cohesion to the band, Posacki said, because it was able to incorporate unique parts for all the members of Zebra.

The other songs on the EP come from bands Posacki played with in the past, but never recorded.

“We went right in with those,” he said. “We’d been playing them live for a while.”

Zebra has a unique sound that melds funk with groove rock.

The saxophone featured in the band helps create their vibrant and vivacious sound, he said, while challenging the band to incorporate tunes that can highlight the instrument along with guitar, bass, drums and keyboard.

“It is a bit different," Posacki said. "A lot of times it’s just Joe [Ernewein] in the background doing his thing filling in some empty space here and there.

“It gives is a little bit of direction – we know how versatile we can be.”

The four songs featured on the EP will be familiar to fans as they have been a mainstay in Zebra performances, he said. The songs take on a new tone after being recorded in the studio while staying true to the live experience.

“When you are recording the canvas is so much bigger. You can keep layering things and adding sections,” Posacki said. “For these songs, it was pretty true to the live format that we play.”

The band is happy with the release of its debut EP, Posacki said, but is already planning next steps and creating new music.

“I’m already looking forward to the next one,” Posacki said. “The next one will be better for sure because now we know what we’re going to do and how to use that new tool.”

The new EP can be purchased on Bandcamp.com and CDs will be available at the shows. The album will also be available for streaming on Spotify and other online applications.