Daughter remembers Vancouver man who died of COVID-19 with memorial 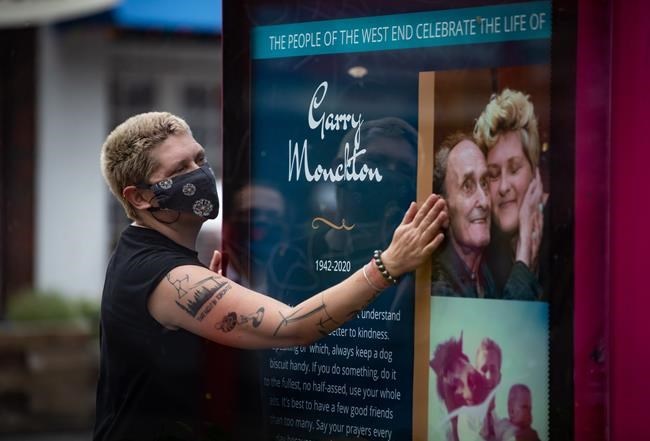 VANCOUVER — The daughter of a man who died of COVID-19 paid tribute to him and other seniors who have lost their lives at a memorial she unveiled in the West End of Vancouver.

His daughter Samantha said she played "Blue Moon" and "When the Saints Go Marching In" on the trumpet for her 77-year-old father outside his long-term care facility because she couldn't visit him during his final days.

"I wasn't able to go and see him because we were all locked down at that point," she said standing in front of the poster at a bus stop on Tuesday. The poster will be up for about a month.

Monckton said her dad would have been "really pleased" to have been honoured in the part of the city that was important to him.

"I think he would have understood how important he was to the community," she said. "He was very humble in everything he did. He was very active, but he didn't seek praise."

He was blinded as a boy after being hit by a motorcycle, but it didn't stop him from a career as a physiotherapist. His daughter said he even treated Bobby Orr when the hockey great played for the Ontario Hockey Association's Oshawa Generals.

The memorial in the city's West End features three pictures of Garry Monckton, along with a short description of him, including his favourite mantra to "always keep a dog biscuit handy."

The poster is a reminder of how COVID-19 has touched almost everyone and the precautions people should take, his daughter said.

Monckton said she still hasn't come to terms with her father's death.

"I haven't been able to grieve with my family. Just soldiering on, I guess," she said.

British Columbia has lost more than 200 people to COVID-19.

Her father suffered from dementia and was not quite himself, she said.

"All I know is that on the last day, after basically not really eating and drinking, he asked for several cups of ice cream, and he gobbled them up and then he died," Monckton said.

"So, he died how he wanted to go. With a belly full of ice cream in the West End."

This report by The Canadian Press was first published on Sept. 15, 2020.