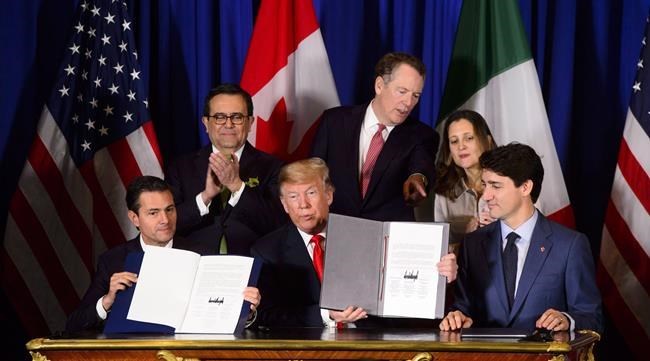 WASHINGTON — North America's new trade agreement finally became the law of the land Wednesday, complete with a celebratory warning from the Trump administration that the United States intends to make sure Canada and Mexico live up to their end of the bargain.

U.S. trade ambassador Robert Lighthizer lauded the U.S.-Mexico-Canada Agreement as Donald Trump's signature achievement, a landmark trade pact that tilts the benefits of continental managed trade back towards workers, farmers and labourers and away from the giant corporations that reaped the rewards of its NAFTA predecessor.

"That's a monumental change," Lighthizer said in a statement that promised more jobs, protections for workers, wider access to continental markets and new growth opportunities for businesses of all sizes.

"We have worked closely with the governments of Mexico and Canada to ensure that the obligations and responsibilities of all three nations under the agreement have been met, and we will continue to do so to ensure the USMCA is enforced."

While the White House and scores of Trump allies in Washington tweeted partisan support for the occasion, the president himself spent the morning preoccupied with some of his favourite foils: the "fake news" mainstream media, Black Lives Matter supporters and presumptive Democrat presidential nominee Joe Biden.

The USTR also named 10 people to its roster of arbitrators under the agreement's dispute-settlement mechanism, a list that includes Julie Bedard, a graduate of McGill University and former Supreme Court of Canada clerk who heads the international litigation and arbitration group for the Americas at Skadden, a prominent New York law firm.

The panel also includes Stephen Vaughn, the USTR's former general counsel and key lieutenant to Lighthizer himself who served as acting trade ambassador in the early days of the administration.

The agreement, known in Canadian government circles as CUSMA, is designed to ensure more people in all three countries can reap its benefits — the principal U.S. complaint about the old NAFTA, said Kirsten Hillman, Canada's ambassador to the U.S. and a key player over the course of the often-arduous 13-month negotiation.

"The original NAFTA was extremely successful for us economically, and that's important to remember," Hillman said in an interview.

"It was, though — as we all know — dated, and also it was perceived to be, I think fairly so in some respects, not sufficient for ensuring that the benefits of trade were fully utilized by all segments of our society."

Canada's negotiators focused on reaching a deal that would improve the lot for workers at home, reduce red tape for small and medium-sized businesses and smooth the growth of digital trade — an especially important component given the impact the COVID-19 pandemic has had on traditional commercial models.

"Smaller businesses do a lot digitally, and they need to kind of be safeguarded, and there need to be predictable rules that they can count on in order to take the risks of venturing out there into the trading world."

Not everyone is celebrating the agreement's coming into force.

Canadian dairy producers and processors, who will see increased U.S. competition in their domestic markets and limits on exports of key products like diafiltered milk and infant formula, have assailed the federal Liberal government for allowing the agreement to come into force before August.

Waiting a month would have given the industry a full year to adjust to the terms of the deal, since Canada's dairy year begins Aug. 1. But now, producers and processors have just 31 days before the 'year two' provisions in the agreement take effect next month.

Both the Dairy Farmers of Canada and the Dairy Processors Association of Canada have insisted they were assured by Ottawa the agreement would not take effect before Aug. 1.

Public Citizen, a left-leaning U.S. consumer advocacy group and outspoken opponent of trade agreements, in particular the original NAFTA, acknowledged that the new agreement makes an effort to improve labour and environmental standards and expand the impact of the benefits of global trade.

"Renegotiating the existing NAFTA to try to reduce its ongoing damage is not the same as crafting a good trade deal that creates jobs, raises wages and protects the environment and public health," Wallach said in a statement.

"The new NAFTA is not a template, but rather sets the floor from which we will fight for trade policies that put working people and the planet first."

Wallach also noted that the agreement is coming into force with a prominent labour lawyer behind bars in Mexico. Susana Prieto Terrazas, known for leading a crusade for higher wages and union protection for workers in border assembly plants, was arrested June 10 on charges of inciting riots, threats and coercion.

This report by The Canadian Press was first published July 1, 2020.