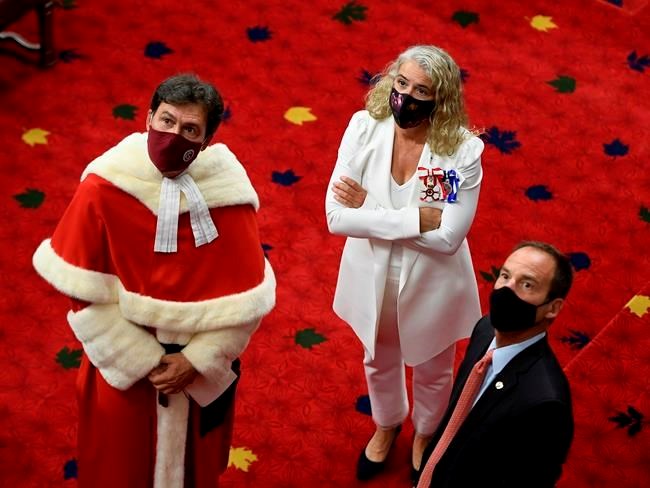 OTTAWA — The government's representative in the Senate is promising to introduce a motion Friday to hold hybrid sittings of the upper house during the COVID-19 pandemic.

Sen. Marc Gold's promise cleared the way Thursday for the Senate to begin dealing with a bill authorizing new benefits for workers left jobless or underemployed by the health crisis.

They were expected to approve the bill in principle late Thursday. It will be put to a final vote in the Senate on Friday.

Frustration over the Senate's failure to find a way to resume full operations in the midst of the pandemic prompted some senators Wednesday to block Gold's initial attempt to speed Bill C-4 through the chamber.

The bill replaces the now-defunct Canada Emergency Response Benefit with a more expansive employment insurance regime and three new benefits for those who don't qualify for EI, fall sick or have to stay home to care for a dependent. It also includes some $17 billion worth of other pandemic-related support measures.

It was passed unanimously in the House of Commons in the early hours of Wednesday morning after just a day of debate.

Qualtrough stressed the urgency of getting Senate approval, telling senators the bill is intended to ensure financial support that has helped millions of Canadians weather the COVID-19 crisis is not interrupted now that the CERB, which ended last weekend, is gone.

"A failure to extend the legislation could disrupt these payments with very harmful consequences for people's lives, families and businesses," she told the Senate.

The Senate has sat only occasionally and briefly since mid-March to pass emergency aid legislation. Many senators want to adopt a format similar to that now being used in the Commons, with members able to participate in all proceedings, including votes, either in person or virtually.

"Many senators face impossible choices in terms of balancing health and safety, ensuring compliance with provincial regulations and discharging Senate duties and it is no longer viable to expect that all senators regularly criss-cross this country during the second wave of the pandemic when it becomes possible to do things differently," Gold told senators Thursday.

"Moving forward, I believe that the implementation of a hybrid approach will best serve Canadians."

Gold added that the Senate's administration has made "much progress" to make hybrid sittings "operational as soon as possible this fall."

After Friday's sitting to deal with Bill C-4, the Senate, which has no other legislation currently before it, is to adjourn until Oct. 27. Gold's motion for hybrid sittings will be considered at that time.