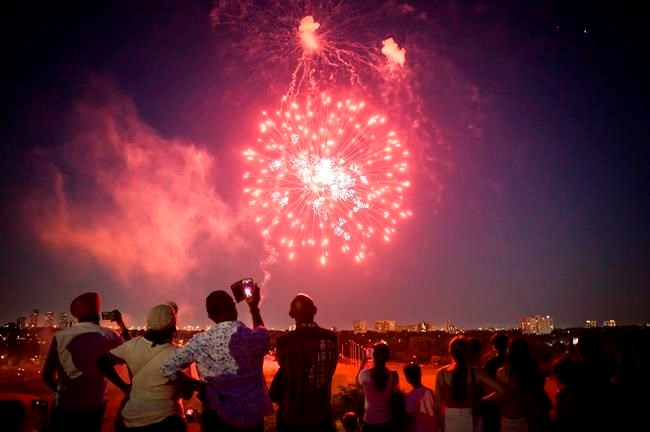 MONTREAL — The owner of a fireworks company in small-town Ontario says COVID-19 has forced the cancellation of dozens of shows he'd typically put on leading up to Canada Day — but his sales haven't been totally extinguished.

Victor Anber, who owns K&H Fireworks in Tecumseh, Ont., said usually he'd have 60 major shows at this time of year, but all have been cancelled, along with other Canada Day celebrations that have been dropped as officials across the country limit gatherings during the pandemic.

But private sales ahead of Canada Day have surged for Anber and other fireworks companies across the country as Canadians look to recreate official displays with do-it-yourself shows in backyards and open fields.

Anber said he had been running three shifts, 24 hours a day, to keep up with orders ahead of Canada Day. He added that he knows of other companies that had to shut down their online order web pages because they couldn't keep up with demand.

"I've never seen this in my entire life," he said in an interview Wednesday.

K&H Fireworks primarily sells to corporate or government clients, but Anber said consumer sales have doubled this year compared with the same period in 2019. It's not enough to make up for the corporate market, however.

He hasn't hired the roughly 100 seasonal workers who normally help out his 18 full-time employees, he said. And despite the growth in the consumer market, he said, "this is going to be a slow year."

Not so for Gary Colquhoun, owner of Fireworks Atlantic in Yarmouth, N.S., whose company sells primarily to individuals.

Sales have recently exploded, he said.

COVID-19 devastated revenues earlier in the year, he said, but in the past two weeks, he's collected five months' worth of orders.

"In other words, people are ready to shoot some — I think," said Colquhoun. "Especially since they cancelled all the Canada Day fireworks and professional shows.

"I think backyard shows are going to be the thing."

He said his company has been completely swamped with orders on stock that has since sold out. "I am expecting to have a very good year to tell you the truth."

And while companies that sell fireworks are seeing a rekindling of sales, the people whose job it is to put on the shows are not doing well at all.

Julie Manchini, general manager of Pro FX Inc., a pyrotechnic company whose clients include the Calgary Stampede as well as the Calgary Flames and Edmonton Oilers NHL teams, said the market has dried up almost entirely.

With the stampede cancelled and the NHL season on hold, Manchini said times are tough.

"Until we can all congregate again I'm not sure where we'll be at," she said Wednesday.

But she said she sees some hope the recent popularity of drive-in concerts.

Manchini said if those kinds of shows continue, her company might see some pyrotechnic work in the coming months.

"I'm hoping that's the wave of the future for this summer," she said.

This report by The Canadian Press was first published on July 1, 2020.