A veteran of the Tottenham-Arsenal rivalry, Montreal's Sagna no stranger to derby games 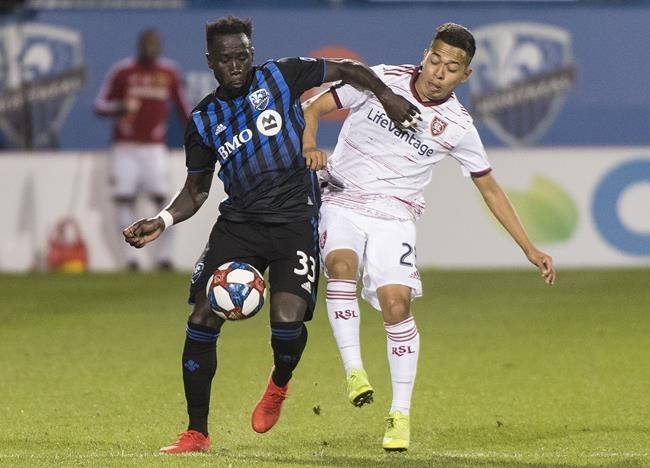 The former Arsenal defender played more than a dozen matches against North London archrival Tottenham Hotspur during his time in the English Premier League.

Now the veteran defender is preparing for one of Major League Soccer's most heated rivalries as the Montreal Impact (9-9-3) host Toronto FC (6-8-5) on Saturday, with both teams looking to jumpstart the second half of their seasons.

"We know what this means for the fans, for the organization," said Sagna, who played for Arsenal from 2007 to 2014. "Now that I'm here, I feel like a true Montrealer, so of course I want to win. We know this is a very important game.

"You can feel the pressure. Our rivals are coming here. The stadium might be full, sold out. We know people expect a lot from that game. They expect a win. So we're going to try to deliver that win."

There will be very few empty seats at Saputo Stadium for the first meeting of the season between Montreal and Toronto as both Eastern-Conference clubs look to get back in the win column.

The Reds have only won once in their last 11 games (1-6-4) — seven points from a possible 33 — and have slipped into seventh in the East. Toronto is five points behind the sixth-place New York Red Bulls.

The Impact, meanwhile, have dropped two games in a row in MLS and are coming off a disappointing 2-2 draw against York 9, which plays in the lower-tier Canadian Premier League, in the Canadian Championship on Wednesday.

"It's time for us to start winning games," said Impact defender Jukka Raitala before training on Friday. "Individually we have to be more focused. We've played good games but we've made mistakes that have cost us. We have to work together and have a good work effort.

"This is a special game tomorrow (Saturday). We want to win, that's clear. We have to show it from the first minute."

Toronto will look very different from the team that lost 2-0 to the Los Angeles Galaxy last week.

Americans Jozy Altidore, Michael Bradley and Omar Gonzalez are back after losing the Gold Cup final against Mexico. Due to the international tournament, Gonzalez has yet to play with TFC since signing with the club last month.

Canada's Ashtone Morgan, Toronto's longest-tenured player, was already back from the Gold Cup but did not come off the bench in the loss to L.A. He is expected to play a part in Saturday's derby match.

And with the opening of the secondary transfer window, the Reds have been busy this week. Toronto signed 22-year-old Venezuelan winger Erickson Gallardo and acquired 27-year-old striker Patrick Mullins from Columbus for homegrown talent Jordan Hamilton.

The influx of players could give TFC a much-needed boost on both sides of the ball as the playoff race intensifies in the East.

"It's a little bit awkward because you have a lot of people coming in," Toronto coach Greg Vanney told the team's website this week. "For us, it's people coming back together, some new faces. You're re-introducing everybody to each other.

"It becomes a little less about the rivalry, and more about our progression to move forward. If it were three weeks down the road, we would be more focused on the energy of the rivalry because everybody would be in more of a flow than we probably are in the moment."

Those additions should help create more chances for all-star midfielder Alejandro Pozuelo, who leads Toronto with seven goals and eight assists in his debut season. The Spaniard has been directly involved in half of Toronto FC's 30 goals this season.

"He's become a very important asset to that team," said Sagna of Pozuelo. "He's adapted extremely well to Toronto's team. We're aware of the danger he poses. He's a very good player, but there are good players on every team. It's up to us not to let him take control of the game."

HOME TEAM SUPREMACY: The home team has won the last four matches in the 401 derby. The Impact's two homes wins against Toronto last year were by clean sheet.

WIN OR LOSE: A Montreal-Toronto rivalry game has not ended in a draw in the previous seven encounters.

SORRY CIMAN: Former Impact defender Laurent Ciman – a fan favourite during his three seasons in Montreal – will not play Saturday due to a knee injury.

BROWNE POINTS: The Impact's Omar Browne helped eliminate Toronto from the Champions League earlier this year. The Panamanian, then with Independiente, scored twice in the two-legged aggregate series.

PIATTI NEARING RETURN: All signs are pointing to Ignacio Piatti returning from injury in the next two weeks, according to head coach Remi Garde.

THE REAL DEAL: Spanish giants Real Madrid are training at Montreal's practice facility until July 19. They will also hold a public training session at Saputo Stadium on July 17.