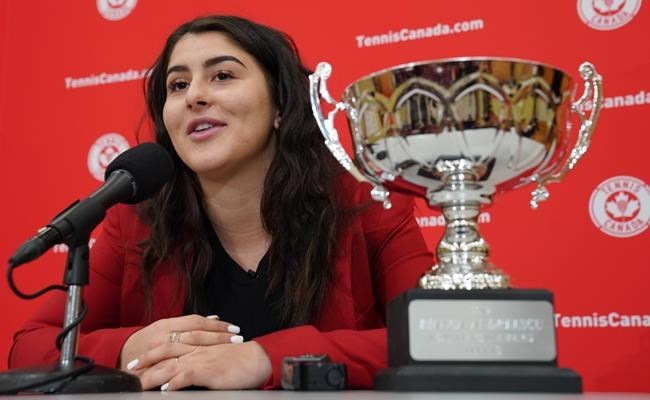 TORONTO — Bianca Andreescu had her season-ending tournament cut short due to a left knee problem. She's hoping the injury won't curtail the start of her 2020 campaign.

With award season at hand, the Canadian teenager is still basking in the glow of her remarkable year on the WTA Tour. Andreescu, the winner of the Lou Marsh Award as Canada's athlete of the year, will soon head out to California to begin pre-season training with on-court work set for next week.

The 19-year-old from Mississauga, Ont., was the unanimous winner of the annual Toronto Star award. She received the trophy Tuesday afternoon in a school gymnasium in the city's west end.

Andreescu was a relative unknown at the start of the year when she was ranked No. 152 in the world. Her breakthrough season included titles at the BNP Paribas Open, Rogers Cup and US Open.

She beat the legendary Serena Williams in the finals at Toronto and New York, earned a staggering US$6.5 million on the year and rocketed to No. 5 in the world.

Andreescu, who finished the season with a 48-7 singles record, became the first Canadian to win a Grand Slam singles title. She has reset her goals for 2020 and hopes to top the rankings list of WTA Tour singles players.

"I think that also helps for me not to get caught up in it. I like to be as private as I can, but yeah, I can definitely see how it changes people."

Victories and injuries were running themes for Andreescu over the last 12 months. Figuring out ways to stay consistently healthy will be a priority going forward, she said.

Andreescu withdrew from the French Open and missed Wimbledon due to a shoulder injury. She battled lower-body injuries at times and hurt her knee at the WTA Finals six weeks ago.

"This year has been incredible," she said. "Honestly it's truly a dream come true. I've been through ups and downs this year. I know that my results were pretty high but I did go through some things. Being able to achieve what I've achieved with all that going on is just incredible."

Andreescu said her rehabilitation has been going well but declined to offer specifics on the severity of the knee injury.

"Well I don't need surgery so I wouldn't say it's very bad," she said. "I can't really say much about it. I'm just trying to rehab as much as possible and stay as positive as I can."

Andreescu twisted her knee when she stretched to make a forehand return during a match in Shenzhen, China. She said at the time that she "heard a crack" and was quite limited after that, eventually withdrawing after getting results from an MRI exam.

"It's not easy because all I want to do is be on the tennis court but I have to deal with it the best way I can," she said. "I kind of know what to expect now. But my team and I are trying really hard to find the things that are contributing to my injuries so that I can have a longer career and play as many tournaments as I can so I can reach that No. 1 spot."

Participation in Australian Open warmup tournaments and the Grand Slam itself will depend on how the knee responds to regular training. Melbourne hosts the first 2020 major from Jan. 20-Feb. 2.

"I'm definitely going to emphasize my pre-season a bit more," Andreescu said. "I guess there can be a bit more pressure on my shoulders since I'm top five. I'm a favourite, maybe, to win a Grand Slam now.

"But I think that motivates me. I think pressure really raises my game to the next level. I think that's why I've done so well in bigger matches."

This report by The Canadian Press was first published Dec. 10, 2019.