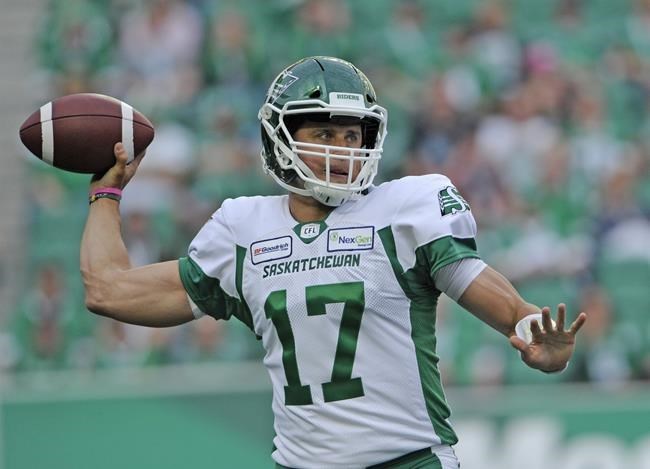 TORONTO — Zach Collaros is off to his third CFL team this season.

The Toronto Argonauts dealt the veteran quarterback to the Winnipeg Blue Bombers on Wednesday just prior to the league's trade deadline.

According to a league source, the Bombers and Argos went back and forth on the subject of draft picks before reaching an agreement at 4:59 p.m. ET, one minute prior to the deadline.

Winnipeg sent a 2020 third-round pick to Toronto. The Argos would receive an additional future first-round selection that could be as early as 2020 if Collaros re-signs with the Bombers. Collaros, 31, is scheduled to become a free agent in February.

The Bombers also received a fifth-round pick from Toronto.

Collaros began the year with Saskatchewan but suffered a concussion in the club's season-opening loss to Hamilton. The Riders subsequently put Collaros on the six-game injured list.

But with the emergence of backup Cody Fajardo, Saskatchewan dealt Collaros to Toronto for a 2020 fourth-round selection July 31. Collaros never played a down with the Argos but has been cleared to play.

Collaros does address a need in Winnipeg. The Bombers are 2-4 with backup Chris Streveler after incumbent Matt Nichols suffered a season-ending shoulder injury.

Like Collaros, Nichols is scheduled to become a free agent this off-season.

Winnipeg (9-6) has clinched a playoff spot but will chase its first win in four games when it hosts the Montreal Alouettes (8-6) on Saturday.

It's not surprising the Argos (2-12) were involved in a deadline deal. Toronto has the CFL's worst record and was eliminated from playoff contention with its lopsided 55-8 road loss Saturday night to the B.C. Lions.

Collaros was one of three Toronto quarterback scheduled to become a free agent this off-season. McLeod Bethel-Thompson, who'll start Friday night at BMO Field against the Ottawa Redblacks (3-11) and James Franklin are the others.

Collaros threw for 2,999 yards with nine TDs and 13 interceptions in 14 games last season with Saskatchewan. Collaros was traded to the Roughriders in January 2018 by the Hamilton Tiger-Cats and signed a one-year deal in the off-season to remain in Regina.

The deal with Winnipeg was also Toronto's first since its front-office shuffle. On Tuesday, the Argos fired GM Jim Popp —who reportedly had a one-year extension in place for Collaros — and replaced him with former player/head coach Mike (Pinball) Clemons.

Toronto also promoted John Murphy to vice-president of player personnel. Murphy said the Argos entertained plenty of offers leading up to the deadline.

"We have to consider ourselves available to everything," Murphy said. "It's always good to hear what people have to say and mainly be open-minded."

But Murphy said the Argos weren't interested in making a deal just for the sake of doing one.

"There was definitely some interest in guys, which there should be."

Bethel-Thompson, for one, wasn't spending any time worrying about his future coming down to the deadline.

"You control what you can control," he said. "You've got to stay in the moment and be where your feet are.

"I'm excited to play Friday night, that's all I can concentrate on."

The former Cincinnati star has started 66-of-90 career CFL games, passing for 16,758 yards with 90 TDs and 51 interceptions.

This report by The Canadian Press was first published Oct. 9, 2019.