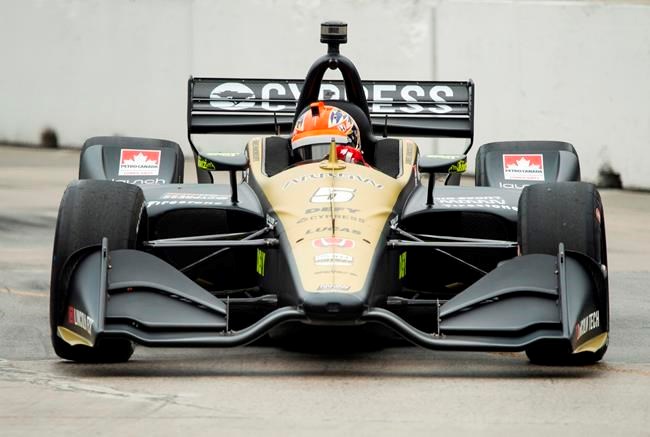 TORONTO — What's touted as the toughest road track on the IndyCar Series is living up to its billing.

Simon Pagenaud laid down the fastest practice lap of the day at the Honda Indy Toronto on Friday, successfully negotiating a tricky Turn 11 that stumped several other drivers.

"I love this track. It's just a lot of fun," Pagenaud said. "It reminds me of Reims in France, and it's just awesome. Just really like the rhythm. The car is honestly really good. I just needed to put a good lap together, and it seems good on every tire in every condition. I've got to get the job done, and I'll tell you what, man, this is so much fun."

James Hinchcliffe of Oakville, Ont., who's never won in Toronto, was 11th.

Turn 11 proved problematic on Toronto's notoriously bumpy 11-turn, 1.786-mile temporary street course. Takuma Sato, who'd spun into the wall at Turn 11 in the morning, was forced to pit when he hit the wall for the second time Friday afternoon. Alexander Rossi also went into the wall there in the afternoon, while Will Power, Josef Newgarden and Sato spun out in that spot in the morning session.

"It was difficult this afternoon, a couple of mistakes from me," said Rossi, who also clipped the inside wall of Turn 9. "But I agree with Simon, it's pretty crazy, it's a lot of fun here, and you're sideways a lot of the time, which is what people want to see in Indy car racing.

"It's probably the hardest street course we go to."

Rosenqvist had no trouble with Turn 11, but could see why others did.

"It's kind of you get into the corner and you don't really see where the apex is, it all looks the same so it's almost a guess where you actually come into the corner, and if you do that too early, then you have to open your steering and there's a lot of turning left to do and the corner comes right back at you," he said.

"It's cool, it's what people want to see, and it's right in front of the pit stand so everyone gets a good view."

Defending champion Scott Dixon of New Zealand recorded the fastest time of the morning practice session of one minute 01.0723 seconds. Josef Newgarden was second fastest (1:01.2138), while Rosenqvist was third (1:2395). Hinchcliffe was 13th.

"The risk versus reward is so big . . . You really have to put it down on the line and try as hard as you can. It's a lot of fun because you know that if you mess it up, it's going to be in the wall.

"That's the thing with all the tracks and the safety these days, some tracks are very safe but are also getting boring for the drivers and the fans because there's such escape areas that you can try things you would never try otherwise. A track like Toronto you really have to think about that risk versus reward, and I think for a driver, that's one of the things that is a lot of fun to balance."

Qualifying for the 85-lap Hondy Indy Toronto is Saturday, while the 35th annual race is Sunday.