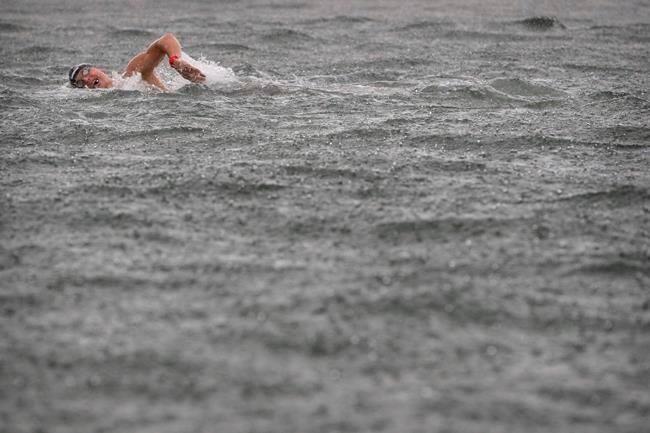 GWANGJU, Korea, Republic Of — Germany won the mixed open water team relay at the world swimming championships in a close finish over Italy and the United States on Thursday.

The German quartet of Lea Boy, Sarah Kohler, Soeren Meissner and Rob Muffels finished in a time of 53 minutes, 58.70 seconds.

Italy, with Rachele Bruni, Giulia Gabbrielleschi, Domenico Acerenza and Gregorio Paltrinieri, was two-tenths of a second behind in a time of 53.58.90.

Haley Anderson, Jordan Wilimovsky, Ashley Twichell and Michael Brinegar made up the American team which finished just three-tenths of a second behind Germany to take bronze in 53:59.00.

There are two males and two females on each team who swim 1.25 each, but the order in which they swim is up to the individual country.

The German team, anchored by Muffels, was disadvantaged by a yellow card issued to Boy in the leadoff leg. A second yellow card would have resulted in disqualification, so each of the German swimmers needed to be careful of their tactics for the rest of the race.

Muffels was a member of the German team that won the same event in Kazan, Russia four years ago.

"I think each of us did a really good job, it was a perfect strategy," Muffels said of the decision to lead off with two female swimmers. "The conditions were quite good with some little waves, and they were not too big or challenging."

Twichell swam third for the Americans.

"I went off with a little bit of a lead, but I knew there were three guys — the Chinese, Germans and Italians — that were coming up on me," Twichell said. "I just had to stay strong in the beginning, and when the Chinese guy came up with me, just tried to get into his pocket and felt like I did a really good job drafting off those three for as long as I could."

"Distance swimmers don't get to swim relays all that often ... but we put together a really good result. It's a sprint for us, so it was really fun watching Michael (Brinegar) bring it home so well."

Brazil's team finished fourth, Australia was fifth and France, Netherlands, Hungary, China and Russia rounded out the top 10 of the 21 countries in the race.

The open water races conclude Friday with the men's and women's races, both non-Olympic events.