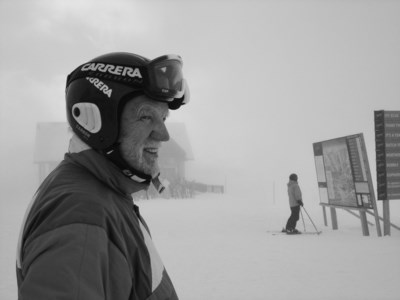 Allan Baker was born in Winnipeg, but his love affair with the Bow Valley began when, as a mid-teen, he travelled through by train to work on the coast. He was so taken that he soon returned, as a bellboy at Chateau Lake Louise.

The war intervened and Allan joined the RCNVR,  becoming an officer when he turned 18 and heading overseas in ’42. After the war, Allan was sent west to Vancouver to work in the financial sector, like his father. He paid his dues, but he wanted to be his own man, so, the summer of '48 found him back at the Chateau as Timekeeper and Night Front Desk clerk.

The grand Bow Valley resorts weren’t open in the winter in those days, so after a session studying pre-med at U of M, Allan got himself an upgrade to Day Front Desk clerk at the Banff Springs the following summer. His time spent working and playing at these two iconic resorts allowed him to make important connections and, more importantly, lifelong relationships with his coworkers. He had fallen in love with the Bow Valley, which would influence the rest of his life.

Through those connections, Allan moved to Calgary, found work as an oil scout with a Mr Boucher of Western Canadian Coal (the Butcher and Baker were a good team), started his family, and stayed close to the mountains he loved.

An attractive pipeline venture took the family to Vancouver and then further opportunities persuaded Allan that Ontario was where the action was, so the five of them eventually headed East.

But, an eventual separation and new governments created new options and Allan decided he really wanted to be close to the mountains, so he returned to Calgary  in '75. His advice and mediation skills became sought after by the oil, coal and ski resort businesses; he was valuable as one who understood both sides with his appreciation for nature, the parks and those that ran them, and his belief that industries could operate in these areas without having wholly negative outcomes, if they did things right.

He soon flourished, skiing and hiking in the Bow Valley and beyond. He gradually learned to use the proper equipment, but not before making his mark sliding dramatically down the ski hill in his repurposed orange sailing suit or passing other fully outfitted climbers in his "perfectly good" work boots and T shirt on his way up The Giant Rabbit (Mt. Hector) or Temple.

His wife’s health required them to move to the coast in ’87, but shortly after her death in ’01 he headed straight for the Bow Valley, this time choosing Canmore.

While Allan no longer worked for compensation, he never let up his activities.  He walked all over town wearing his signature peaked cap, went to every public meeting or presentation, talked to everyone, listening and learning from them, then they from him. He gave much of his time, experience and know how, fighting the big fight into his last years to keep Canada's waterways its own.

When Allan wasn't working, or walking, he was skiing, snowshoeing, hiking or volunteering as a Trailminder well into his 90s. He could be heard barking or howling to identify his location to those that were with him in all those cases and stood out in his choices of bright skiwear on the hills. He loved his opera, hockey, football and any of the local sports he could support as a volunteer or just a fan.

Allan loved the people of Canmore he had chosen to be his friends and with whom he shared a love of the mountains and he continued to watch the trains heading to the coast.

For more about his life please visit:  https://mhfh.com/tribute/details/32726/George-BAKER/obituary.html#tribute-start