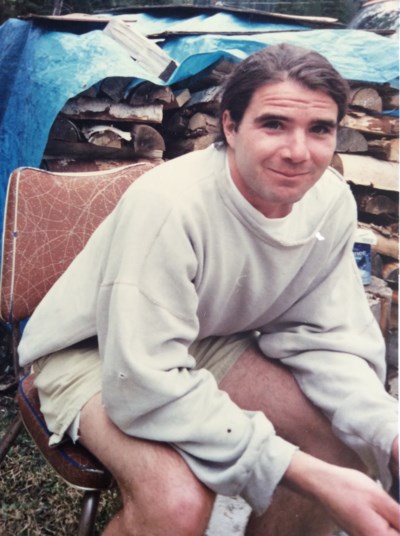 It is with great sadness that we announce the passing of Ben.

Originally from Stratford ON, Ben moved to the Bow valley in 1990 and like many fell in love with the mountains and all they had to offer. They would become his home for the next 30 years. One of Bens first jobs was at Laggan’s Deli in Lake Louise where he became affectionately known as “little ben”.

While living in Lake Louise he enjoyed many days skiing and was an avid mountain biker. Ben loved all things connected to bikes and in later years, could often be seen commuting around Banff on his beloved “Jake the snake”

Ben was a talented chef and worked in various kitchens throughout Lake Louise and Banff always offering innovative ideas with a knack for creating delicious dishes out of seemingly nothing. For the last several years he worked for Banff taxi Company, where he forged new friendships that led to music jam nights, “Saturday night fires” and baseball games. These friends also proved to be a great support for Ben during difficult times.

Ben was a deep thinking., Sensitive soul with a sharp sense of humour and a contagious laugh. Although he had his share of struggles, behind those struggles was a person of great intelligence, integrity and compassion. Ben will be Sorely missed by his parents Diana and Alec McDonald, sister Susan, many aunts, uncles ,cousins ,nieces ,nephews, friends he made along the way, but mostly by his daughter Gemma who was the light of his life and of whom he was incredibly proud and always strived to be a better person for. Rest easy Ben.

“behind every beautiful thing, there’s some kind of pain”

A celebration of life is being planned for August.