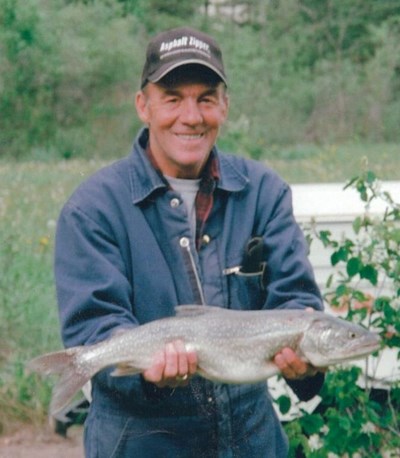 “He was One of the Good Guys”

It is with heavy hearts and great sadness that we share Brian’s passing after a lengthy illness.

Brian was born in Nanaimo, British Columbia, The second of six children to Stella and Wilf. As he grew up, Brian travelled between Alberta, B.C and the Yukon for work. Working with his father, brothers and cousins made these days enjoyable. He was a hard worker who had jobs working in the logging industry, for CN rail and as a proud coal miner.

Brian started working for the Town of Canmore in the 1980s after they contracted him to clear fallen trees in the then new Larch sub division. He began his 32 year employment with the Town as garbage man where he found lots of treasures that he often brought home (I don’t think the man ever left a screwdriver without a home), water and sewer (where he was often found to be the only one in the hole) and finally streets and roads. Many residents of Canmore were grateful to have Brian plow their streets because of his thoughtful attention to detail.

Brian leaves behind Laurie, his wife of 40 years. Married in 1980, the pair bought a home in Larch where they enjoyed hosting family and friends for BBQ’s and bonfires. Laurie worked tirelessly to help Brian through many serious illnesses throughout the years. The family enjoyed yearly trips to the Okanagan to soak up the sun and camp. Brian was a calm and caring father who taught his children to take things as they come and enjoy the simple things in life.

Before his health declined, Brian enjoyed fishing. Whether it was a crack of dawn trip up to Spray Lakes, a chartered boat trip off of the west coast or a helicopter adventure to a mountain top lake. Bushwacking was another hobby for Brian where he would scour the woods for the perfect diamond willow branch to turn into a one of a kind hiking stick or cane. Long weekends at the Lewis’ farm with family, good food and bon fires was what Brian took pleasure in later in life.

Brian is survived by his wife Laurie, son Matt and daughter Michelle. He was a dear brother to Jerry (Claire), Dwain (Karen), Karen (Lloyd), Randy (Rhonda) and Mark (Deb). Brian was loved by numerous nieces and nephews, extended family and friends.

Due to COVID-19 a Celebration of Life will be held at a later date.