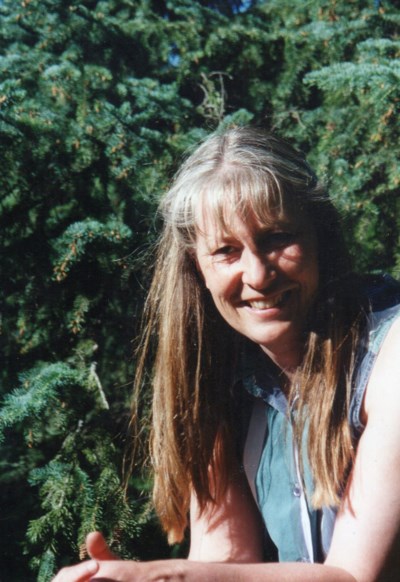 Doreen Marie Bruhjell, from Red Deer Lake, AB, passed away on August 30, 2020at the Foothills Country Hospice. Doreen is survived by her partner, Warren Webber, of Okotoks, AB, daughter, Laura (Ray) Johnson and grandchildren, Katie, Anna, Lee, Sara and Bo of Dunster, BC, brother, Allan Bruhjell of Calgary, AB, his daughter, Camille, and her daughter, Isabella, of Calgary, AB, brother, Michael (Noeme) Bruhjell, of North Saanich, BC, and Michael’s children, Michael and Vicky of Calgary, AB. Doreen was especially close to her dear Aunt Ruby Bruhjell of Chilliwack, BC, and kept up daily calls to her until she, Doreen, was no longer able to do so. Most importantly, she is also survived by Josey Bruhjell, her precious little canine companion.

Born in Calgary and raised in Canmore, AB, Doreen spent her childhood summers playing in the creek running through the family property, riding horses and tending to guests at the Canmore Ranch. These early experiences no doubt established the foundation for how she approached her vocation as a teacher, a profession for which Doreen had a deep passion. She taught school in Canmore from 1970–1987. She also taught in the Red Deer Lake and Okotoks area from 1994–2008, and over her career became a much beloved teacher and friend to many, students, parents and colleagues alike.

Through the 1980s Doreen enjoyed her thoroughbred and quarter horse race horses. She never met an animal she didn’t like, and the feeling was mutual. She was equally devoted to her friends, and considered them family. Her compassion in her personal and professional relationships was well recognized. She will be dearly missed by many.

At Doreen’s request, no service will be held. A remembrance will be held at a future date when circumstances will allow. In lieu of flowers, memorial donations can be made directly to Foothills Country Hospice.