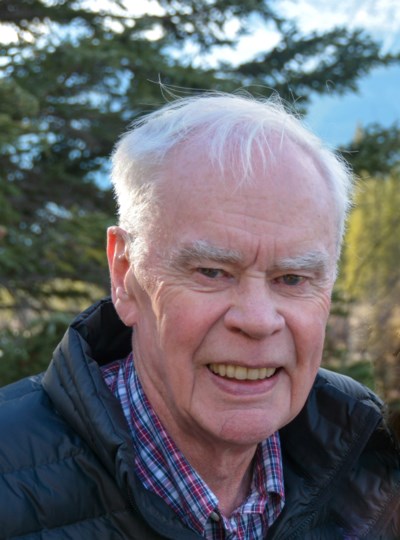 Donald Wilfred Simpson was born in Saskatoon and moved to Calgary as an infant. His father was in the army in Europe at the time and they never met until after the war when Don was 4 years old. Don graduated from St. Mary’s high school in 1959. He worked for a major oil company as an accounting clerk while studying accounting at night school. After a few years he decided that he had made a poor career choice and embarked on a trip to Australia. He travelled extensively while there and at various times was an apple picker, beachcomber and a “computer” on a seismic crew. The seismic job afforded the opportunity for much more travel, and he benefited from several mentors who taught him many of the basics of seismology, and awakened a lifelong interest in that subject. Following two years in Australia, it was time for another adventure which included a trip through Indonesia, much of which was as a deck passenger on a tramp steamer. After an extended stay in Switzerland he returned to Canada and worked with a seismic company.

Don and Mary Lou had gone to high school together and met through youth groups. They were married in 1965 and over the next six years were blessed with Glenn and Jennifer. His seismic career included stints at Seismotech and Digitech before he found his “home” at Geo-X Systems. At Geo-X he was primarily involved in the seismic processing area but later spent much of his time with the Aram Instrumentation group. He enjoyed the friendship and mentorship of many outstanding co-workers, particularly Don Chamberlain.

Don was an active member of the Canadian Society of Exploration Geophysicists, and for many years the Rotary Club of Calgary. He and Mary Lou were also long time members of Canyon Meadows Golf and Country Club. Following a move of their main residence to Canmore, they became members of the Canmore Golf and Curling Club.

Don had a lifelong interest in photography, downhill skiing and cycling. He enjoyed many scenic rides in the mountains as well as numerous bike trips and long distance rides with friends. Along with skiing and cycling Don also enjoyed sailing on the West Coast and in Europe with family and friends. Following his retirement in 2001, he satisfied a long held desire to ski more and worked as a ski instructor for 4 winters.

Don and Mary Lou enjoyed many years of traveling and finally “settled” in Arizona as a winter home. They developed many friendships during their winters there and took advantage of the many educational offerings. He also enjoyed watching his three grandsons grow into fine young men, led by Poppa Don’s example.

Don is survived by his wife of 55 years, Mary Lou, son Glenn and partner Stephanie Gray, Glenn’s three sons, Killian, Cormac and Kieran: Don’s daughter Jennifer and her husband Cameron Henderson. He is also survived by his sisters Linda and Marianne and their families.

In lieu of flowers, the family is requesting a donation in Don’s name to the

Canmore and Area Healthcare Foundation, 1100 Hospital Place Canmore, AB T1W-1N2 https://canmorehealthfoundation.com/, or a charity of your choice. A Celebration of Life will be held at a later date.