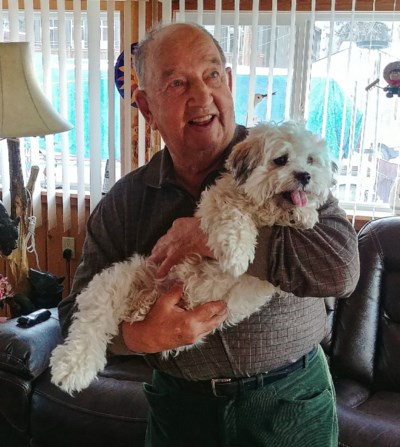 Processed with VSCO with preset

It is with profound sadness that we announce the loss of the greatest Husband, Dad, Jet, Uncle, and friend, George Juravleff.

George was born in Babruysk, Belarus to his parents Stephen and Maria.  George was the Baby of the family of 4 children. George immigrated to Canada in 1950. After working on a sugar beet farm in Lethbridge, George moved to Canmore following his best friends who had a beautiful sister Mary.

Mary and George wed August 7, 1954 in Canmore with a 3-day celebration. Mary and George have three children, Ron, Susie, and Deb.  The family’s bond of love will forever hold them together.

George was a Legend in town who gave everyone a beautiful smile, and always had time to stop and chat.  George was a hardworking man who retired as a Millwright from Lafarge with 43 years under his belt.  He was a prankster and loved to organize and play pitch on coffee breaks, and lunch time.  When it was time to go back to work, everyone would hear, “Roll ‘em out!” with his beautiful Russian accent. George loved playing his weekly pitch matches with all his buddies at the Legion.  He swore up and down he never cheated.

George loved his Family; His pride and joy. George was his kids’ Hero.  Many stories were told about the days in Russia.  Hardships that were tough to talk about, that gave his Family the understanding of the value of life.

George was a problem solver. Always in a fast manner (GOOD ENOUGH!), so he could get back to more important things like chess, in which he was never beat. George taught his kids, and his four Grandchildren how to play chess.  Many years and hours were spend around the chess board, everyone trying to figure out how to win.  The only time anyone would win, if George would let them.  The smile that was brought to the kid’s faces, was what George loved the best.

George was a kind, humble, and caring Man.  He was the light in his Family’s eye.  He was the pillar of strength that moulded his Family. George was patient and loving; never judged anyone, and treated all in his life as an equal.  George never complained or had a bad word about anything.  George never wanted to hurt anything even the smallest of insects.  George said, “Even a little bird has to live”. He was a man who always had a twinkle in his eye, and a mischievous grin on his face.  That grin did lead to many pranks that were pulled on all Family members and Friends.

George is survived by his Beautiful bride of 66 years, Mary.  Their profound love and adoration for each other could be seen by all in Canmore.  They walked hand in hand through their journey in life with the love that so many wished for.

George is survived by his son Ron and his two daughters, Susie and Deb. George was the Greatest Dad who gave these three unconditional love.

George is survived by his Daughter-in-law Cathy, and his Sonny-in-law Pierre. George was Dad to them, and George treated them as such.

George adored his Grandchildren and is survived by Stephen, Nikolas (Cara), Chloe, and Sasha.  George’s eyes became brilliant blue with excitement when he was able to spend time with them. The kids all loved by their Jet with his heart and soul.

So many Friends and Family Members have lost a Great Man.  The void never to be filled.

There are not words able to express how genuine and loyal George was.  His presence gave calm to everyone around him.  George has touched so many lives with love.

Bella misses you and continues to look for you.

Church service has taken place. George has been laid to rest and in the arms of his Lord.

The Juravleff Family would like to Thank Doctor Michalyshyn for his dedication in helping George with all his medical needs.  Special Thanks to Doctor Wickham, George’s Buddy, a special bond of trust.

Thank-you to all the Canmore Hospital Staff and Homecare for their guidance and help.

A celebration of George’s Life will be held once we are able to gather.  This will be a party to remember the Outstanding Man George was.  A big Bash, as George would have wanted with his Family and Friends.

In the want to contribute, please kindly donate to the Canmore and Area Health care Foundation.

Dad – please watch over us, as you always have – guide us and give us strength to continue our beautiful lives that you gave us.  Keep us safe.  We will take care of Mom. We love you for eternity.