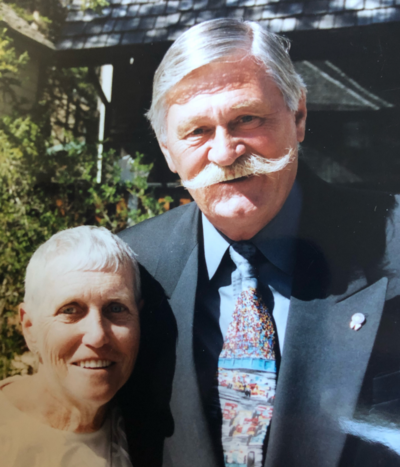 Glen is survived by his sons, Norm Baillie (Mark) and Larry Baillie; his grandchildren: Jared (Christina), Jason (Caitlyn), Shauna (Tyler), Kevin (Megan), Vanessa, Emily (Garret), and Ross. Glen had many great-grandchildren whom he loved dearly: Sunny, Kai, Eric, Alex, Mary, Colton, and Bo. His love of family was most evident in his smile, found under his big mustache.

Glen met his partner for life Marjorie, who was a passenger on a train while he was working with Canadian Pacific Rail, they were married in 1954, and started a family in Scarborough, resulting in four spirited boys.

In 1953, Glen went on to a 27-year career with the Metropolitan Toronto Police Force as a Constable and Detective Sergeant. As a young father and adult, Glen and Marjorie were dedicated Scout Leaders, spending many vacations and holidays in the outdoors.

Glen and Marjorie’s love of outdoors carried them to Banff in 1979. With the move, Glen, Marjorie, Blue, and Bob opened the Spoke & Edge. This brought them many days on ski and bike trails, but most of all, lifelong friendships made through the “Spoke”.

In retirement, Glen became heavily involved with the Rotary clubs of Banff and Canmore. He served as Rotary District Governor (District 5360) from 1996-1997, his proudest accomplishment. Glen was a lifelong volunteer and a dedicated member of the Bow Valley Credit Union Board of Directors.

Glen loved to golf, ski, bike, and play squash. He had numerous friends whom he would enjoy these activities with, however, his favourite were his grandchildren. Glen loved to fill his days with his grandchildren, taking them in the motorhome across North America, or attending sports events.

The best bet to find Glen and Marjorie was to visit the Canmore Golf and Curling Club. This was a special place for him as he loved the game nearly as much as the friendships and community that came with the membership.

Glen was a loyal Calgary Stampeders fan. He and Marj enjoyed attending home games for many years as season ticket holders. After moving to Winnipeg in 2018, he loved attending Bombers tailgate parties and games in his Stampeders gear with Larry and Kevin.

The lasting picture of Glen, by his Bow Valley friends and family, is of Glen and Marjorie hand in hand walking in town. It is with comfort that we know Glen has taken Marj’s hand once again, in Heaven, with his sons Blue and Bob, and his granddaughter Meagan close by.

In lieu of flowers, donations may be made in our Glen’s name to the Canmore Rotary Club, designated to the Glen and Marjorie Baillie Memorial Benefit Fund at https://www.canadahelps.org/en/dn/56113.

With the Covid-19 restrictions now in place, it is the hope of the family that we can remember Glen in the coming year.

Condolences for the family may be sent to www.bowriverfuneral.com