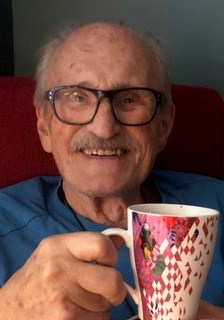 He was quite a guy, our Gunnar. This intrepid Swede left everything behind and moved to Canada 4 years ago at the age of 91. His wife of 58 years had recently passed away and he had no living relatives in Sweden. However, he did have a stepson and daughter-in-law in Canmore who had invited him to come for a visit. As only Gunnar could, he arrived with 2 small suitcases and told us that since we had to look after his death anyway, he might as well stay here until the end of his days. Thus began Gunnar’s new life of adventure in Alberta, B.C and beyond. Nothing could stop him from enjoying the sun. Whether using his cane, walker, or wheelchair, he managed to join us in Vancouver, Victoria, Summerland, Penticton and even Loreto, Mexico, where we celebrated his 94th birthday. Making it to the 95th was an ordeal but with his usual steadfast determination, he survived a horrendous 4-day trip back and forth to Sweden and the disheartening diagnosis of several more serious illnesses. Although clearly in failing health, Gunnar had a wonderful party, surrounded by the angels in his life (He had a soft spot for pretty girls of all ages). He did get to bask in the sun 3 more times. It may not have been an exotic location, but from the driveway where he spent many an hour taking in the afternoon rays over the past 4 years, he was able to wave and/or chat with the neighbours and passers-by who knew him well. Many folks living on and around our Morris enclave will miss this intelligent, thoughtful Nordic gentleman. Huge thanks to Doctor Brandon Hone, Canmore Community Care, especially Nurse Julie, the ER staff at the Canmore Hospital, The Ridgeview Medical Clinic, Cheryl Graham for foot-care extraordinaire, Doctor Mike Wickham, who came to the rescue on numerous occasions and all the other wonderful residents of this amazing neighbourhood.