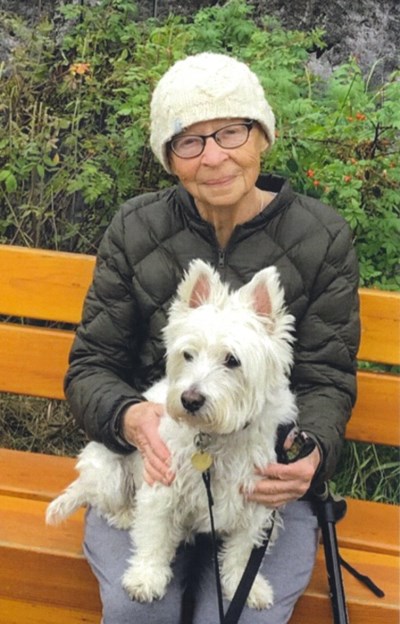 Having reached 90 years old, Irene was a woman of great style, sharp mind and had a fondness for cooking, shopping and flowers nurtured on her Canmore condo deck. She loved to read, followed the news daily, attending art exhibitions and enjoyed entertaining friends and family. Irene had a deep regard for nature and walked daily with her constant companion: a stubborn Westie named Toko.

Nine years ago, Tom Laviolette, Irene’s beloved husband of 56 years passed away.  By then, Canmore had already served as their new home for over 15 years after raising a family of five in Edmonton, AB.  In that city, from the early 1970s to the early 1990s, Irene made use of her secretarial and administrative abilities with Laviolette Engineering (now operated by Barry Laviolette, a structural engineer like his father). These valuable skills were part of the business training Irene had received at Edmonton’s Alberta College after the war.

Born at home near Holden, AB in 1929, Irene weathered The Great Depression and Second World War with father Francis (Frank) J. Condon, mother Nadeika (Shehinski) Condon and three siblings: Angie and the now deceased Bill and Ted. Her early education was unusual in that her father, Frank, was her teacher! For Irene, schooling in rural central Alberta meant modest country schools heated with coal, no school buses and where Swedish, Ukrainian, German and Polish was the mother tongue of many of Irene’s classmates ranging from Gr.1 to 9 in one classroom.

This multicultural exposure served Irene well throughout her life as she was known for her kindness and generosity. Late in life, many supportive friends like Michèle, Debbie, Roseanne, Christine, Vladi, Linda, Rachel, Pauline, Kathie, Bruce, Vanessa, Priscilla, Gaby and Rudi commented on Irene’s lovely demeanor.

Incapacitated by cancer, Irene spent five months in the Canmore Hospital and not enough can be said about the care she received from Dr.Hawkins, nurses and health care aides. Earlier, it was the steady care of the hospital’s Cancer Clinic.

A 25-year parishioner of The Shrine Church of Our Ladies of the Rockies, a funeral mass is being planned for Irene Laviolette sometime in the early Fall (Covid dependent).